A lot of cultural shifts were taking place 40 years ago as evidenced by some anniversaries taking place this year. A couple weekends there were a couple remembrances of the events that took place around June 12, 1982 when over 1 million people descended on the United Nations (UN) Headquarters, marching through the streets of New York and gathering in Central Park. Almost 40 years after the U.S. became the first and only nation to use nuclear weapons in Japan, the message of the largest anti-nuclear and anti-war protest had a simple message “No More Hiroshimas.” 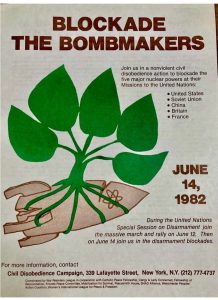 Many of the speakers  on the webinar reflected on the pressing issues of the day and the context in which the June 12, 1982 events occurred. The four main issues that galvanized people to attend were the elimination of nuclear weapons and nuclear power, honoring Native American Treaties and full employment for all. You can watch one of the webinars, Defuse Nuclear War, commemorating the event here.

The issues seem prescient and many were issues that were brought up later in the week at the Poor People’s Campaign on June 18th in Washington D.C. which you can watch here. The Campaign has centered what Dr. Martin Luther King Jr. called the triplets of evil—racism, militarism, excessive consumerism—and then added the climate crisis that we find interwoven in all of these issues. Rev. Barber, one of the organizers, brought up one of the key components of the original Poor People’s Campaign, utilizing nonviolent direct action to put pressure on decision makers when he declared “If we need to engage in nonviolent civil disobedience—then we will engage!”

There was some mentions at the June 12 Legacy webinar of the mass civil disobedience campaign that was organized by War Resisters League among other organizations. The words toward the end of the webinar were quite striking, “If we don’t risk doing what seems impossible then we face an unthinkable future,” It was that spirit of risk taking that inspired over 3,500 people to  shut down the United Nations missions of the 7 major known nuclear armed countries on June 14. There were over 1,700 arrests with some folks having multiple arrests on that day. 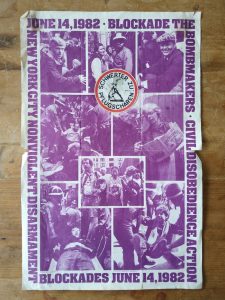 There will be a webinar Saying No to Nuclear War through Nonviolent Direct Action Wednesday June 22nd at 7pm Eastern (4p Pacific) to share about the Blockade the Bombmakers campaign of that day and discuss upcoming events around nuclear disarmament at the UN in August. You can find out more information and register here.

I look forward to joining the webinar to learn more about that time. The role of civil disobedience in pushing for “freezing” the use of nuclear weapons likely played a part in not having escalated wars to a nuclear confrontation. I am particularly curious to learn from those who embraced war tax resistance in their attempt to prevent nuclear war worldwide. One of the organizers of the upcoming webinar, Ruth Benn, wrote, “A Good Reason to Refuse to Pay War Taxes” about how the issue of nuclear weapons motivated her war tax resistance.

And for some  big news: NWTRCC is turning 40 this year! We will be celebrating this milestone with a weekend of events at our conference November 4-6, 2022.  Save the date and stay tuned for more details! We will be reaching out in months leading up to learn more of your journey with war tax resistance.

One thought on “Reflecting on the Last 40 Years”