The IRS has been so quiet lately that it’s been hard to find topics to write about — except for interesting historical notes or the horrors resulting from the massive U.S. military budget. But three people got in touch recently with three different issues. At a time when war tax resistance seems pretty quiet too, it’s always encouraging to be reminded that resistance continues. 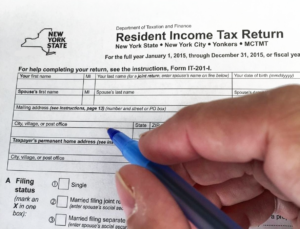 One meeting —in person! — was about whether or not to catch up on filing state taxes. This resister has been a federal and state nonfiler with a low income for a few years. Now, due to changes in her employment and the fact that the IRS filed for her one year and is trying to collect, she feels it is time to catch up with the feds. She only owes Social Security/Medicare taxes for reported self-employment income, which she might decide to pay. But the state has not been after her at all, and her test filing showed that she didn’t have a taxable income and may even be owed a refund. New York State tends to be pretty efficient about going after state tax debt and pretty nasty about the whole process, but in this case there didn’t seem to be a need to file until she starts her new job.

In the course of our conversation I was reminded that it is useful to be able to talk openly about income, share tax forms and discuss them line-by-line. She used an online state tax preparation software, and I’ve been a dedicated paper-filer, but by not using the online option for state filing I had missed one credit I could have taken advantage of. It is a credit that is not obvious on the paper forms. So next year I will use the online version to make sure I’m not missing anything and then transfer the numbers to paper to file. I don’t want to get into online payments for taxes, which just gives the government — state or federal — a direct line to your bank account.

I was happy to get a call from a first-time resister. She and I had talked about state taxes months ago. (My focus has always been on the massive federal military budget, so I remain neutral on state tax resistance except that I always warn potential resisters that the NY state is much quicker to collect than the feds.) But this conversation was about her first collection letter from the IRS for federal taxes she refused after filing on May 17 this year. That’s pretty quick work for the IRS these days, so we discussed her employment situation (contractor) and the various things that might happen, the most certain being more letters from the IRS.

Erica Leigh wrote a good blog about letters a few years ago. If others have more recent links, please share them in the comments.

Finally, another friend sent an “oh oh they’re coming” email with a copy of a notice she received that shouts “Levy of Social Security Benefits is Imminent.” This scary-looking mailing from the “Tax Assessment Procedures Domestic Judgment Registry” (with an intriguing logo that I can’t quite make out) threatens that “the Federal Taxing Authorities can legally initiate the collection process of levying your Social Security Benefits and or any other retirement accounts.”  This so-called “Federal Taxing Authorities” cannot legally take anything. Only the IRS can do that. In fact, this very notice borders on illegal. It is a scam, one of many that the IRS is continually fighting.

When you receive letters that threaten collection but don’t actually look like an IRS letter, do a simple search online. In this case, if you type in “tax assessment procedures” the search engine automatically adds the word “scam.” A lawyer has a similar sample letter on his site with a good write-up about the scam. Do a search on the phone number in the letter; that also indicates it’s probably a scam.

Then I typed in “letter from federal taxing authorities,” which brought up a link to an IRS webpage titled “Taxpayers should beware of property lien scam.” The text of my friend’s letter indicates that whoever is behind it found her name in her county’s public lien postings.

There’s often a moment of catching one’s breath when an envelope arrives from the IRS (or even from one of the fake “taxing authorities”), so it’s helpful to remember “the IRS operates on 90% bluff” according to former Sen. Henry Belmon decades ago. Of course, we do need to stay prepared for that 10%. Having a support network in place is part of that preparation.

One thought on “Taxing Issues”