In the early hours of Friday morning, US troops departed Bagram Air Force base in Afghanistan. They turned off the electricity and lights before leaving; it appears as though members of the Afghan government were left in the dark about the departure of US troops. Biden has been clear about a formal departure on September 11th of this year but with the definitive closure of the airbase last week, the US has completed 90% of the troop withdrawal. 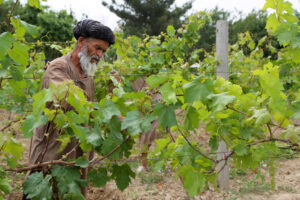 In the New York Times article The Salvaged Relics of a Very Long War: Shops Near Vacated Afghanistan Base Sell Vestiges of US Presence describes how Bagram, surrounded by grape vineyards, has an economy based on the refuse of two superpowers over the past 40 years. The article mentions that even the US Special Inspector General does not know how many firearms were sent to Afghanistan or if there are more American M16s than Russian Kalashnikovs. In some places, Afghan troops have surrendered to insurgent groups because they do not have ammunition.

“As they left, the Americans demolished things like armored cars and more than 15,000 other pieces of equipment deemed excess property, a catchall that allows US forces to destroy items so that they are not sold by the Afghans for profit.” Still some who have been left behind in the ravages of war were able to gather some of the spoils/ scraps of war to sell to try and make a living or to preserve life.

During a press conference later in the day after US troops left Afghanistan, President Biden cut off a question on the issue saying, “I want to talk about happy things,” which for him meant the US jobs report. When asked about concerns about the US pulling out troops, Biden said “Look, we were in that war for 20 years. Twenty years. The Afghans are going to have to be able to do it themselves with the Air Force they have.”  The US has offered to support the Afghan troops with teleconferences and drones from afar.

As with many of the wars, the US government has depended upon the US people to be unaware or apathetic about the fighting. Former Air Force analyst, Daniel Hale was concerned that the US public was not getting important  information about the nature and extent of US drone warfare. He had worked for the National Security Agency at Bagram Air Force Base and could not distinguish who was being targeted in drone attacks. He released information to the public and is facing sentencing on July 27 on charges related to whistle-blowing. He was appealing to the conscience of the people of the US responsible for growing numbers of civilian casualties from drone airstrikes. 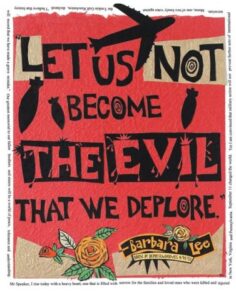 Fortunately, throughout all of the history of wars, there have been people raising awareness and resisting wars; cutting through rhetoric about ‘good wars’ and other ways of distancing from the impacts of war.  In the US, we are in a unique position with the largest portion of our taxes going to war to resist these taxes in ways that are not as easily done in other parts of the world. Barbara Lee, who was the sole vote against the authorization of use of force following the September 11 attacks, has recently introduced legislation that would reduce funding to the Pentagon. While she has acknowledged that it may not be passed this year she states, “we cannot continue to prioritize funding for a department known for its waste, fraud, abuse, and failure to pass an audit—especially when the money to ‘protect national security’ is failing to protect our most vulnerable citizens.”

2 thoughts on “Left in the Dark: $2 Trillion and Counting…”