Later this year the U.S. will enter into its 3rd decade of war in Afghanistan. It has been the longest ongoing foreign war in US history with some of those fighting in the war not even born when the US began bombing on October 7th, 2001. In the early years Afghanistan was referred to as “the good war” to distinguish it from the war in Iraq, the “dumb war.” In more recent years both are referenced by their country name with less emphasis on the war and all of the destruction the U.S. has caused. These countries seem to hold a higher concentration of U.S. military bases among the 800 worldwide with the wars serving as justification for more bases to launch wars from in an endless cycle. 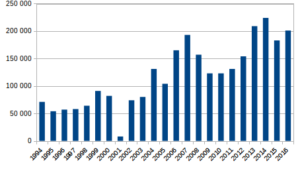 While one might believe the war in Afghanistan has been winding down in recent years, the bombing campaigns have increased since Operation Iron Tempest in 2017 which was to target opium labs. Since 2001, the U.S. has spent over $8.9 billion on counter narcotics efforts, yet production of opium has hit record highs in Afghanistan in recent years.  Prior to the U.S. invasion, poppy production was restricted and forbidden under the Taliban leadership but now accounts for about 65% of the Taliban income through their role in operations and “taxes” imposed on the farmers.  Over the past 20 years Afghanistan has been responsible for about 85% of the global  illicit opium trade annually. Some senior U.S. military officials questioned using F-22 fighter jets at the cost of $35,000 per flight hour to “blow up rudimentary opium stills” in recent bombing raids of Afghanistan.

The Biden administration has pushed back negotiations with the Afghan government and Taliban that were scheduled for this week. The previous administration had made arrangements for the withdrawal of U.S. troops by May 1st of this year although that too has been postponed. It seems to be part of the U.S. policy of out of sight out of mind especially with a war weary U.S. public who are focused on their own economic survival.

While the U.S. seemed impervious to the warning that Afghanistan was the “graveyard of empires,” it maybe more accurate to say Afghanistan is the “battleground of empires.” The situation that led to the demise of the Soviet Union bears an eerie resemblance to the U.S. today. Yet the U.S. does not need anyone’s prodding to spend more on its military. It appears as if it is addicted to war as evidenced by annual military spending and the harm that comes from it. 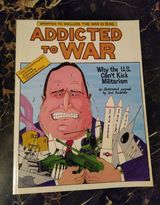 The evidence of the bloated military spending can be witnessed in the 1033 Program which has transferred over $7.4 billion in military equipment to over 11,500 police departments in the U.S. since September 11th, 2001. The precursor was the 1208 Program that was enacted in 1990 in order to eliminate the military surplus or waste following the Cold War and to assist in the War on Drugs. The 1033 Program has become the disposal program of the Pentagon to get rid of its excesses instead of dumping it in the landfill; all the police departments have to do is pay for the postage and use it within the year.

It is not just military equipment that is being transferred to police departments, but members of the military are given priority in the Vets to Cops program of the COPS Hiring Program. Often, soldiers return from combat bearing the harms of war and then are handed the very weapons of war when joining “law enforcement.”

Some of what defines addiction is doing something repeatedly without concern of the cost to self or others. It would be a great day when the military has to clean up its messes in the world before it can receive any more on the Pentagon’s wish list. One of the most powerful things about war tax resistance is turning off the spigot—going to the source of harm and saying enough is enough. 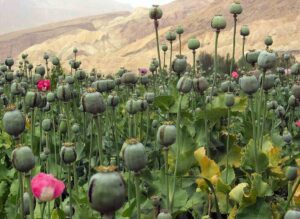 2 thoughts on “The Graveyards of Empire”