On the subway headed to the Nakba Day demonstration in Brooklyn, May 15, 2021. NYC photos by Ed Hedemann.

So said a Palestinian lawyer in Gaza City as he gently shook his finger at the group of Americans on a human rights witness tour of the West Bank, Gaza and Israel. That was back in 1988, on a trip I took with the Arab-American Anti-Discrimination Committee, who continue demands to cut U.S. aid to Israel and protect Palestinians.

I’ve written about that trip and that lawyer before, because I came home and changed my income tax resistance and redirection from some partial amount to 100% of what was due to the government.

This tax day — many “peace processes” later — that trip was much on my mind with the death toll from the latest Israeli strikes rising over 200 and more than 60 Palestinian children killed by Israel’s well-armed and vast military and two Israeli children killed by Hamas rockets. Of the many stories, this one reported by Mondoweiss.net was especially heartbreaking:

The Norwegian Refugee Council confirmed today that 11 of over 60 children killed by Israeli air strikes in Gaza over the last week were participating in its psycho-social programme aimed at helping them deal with trauma.
“We are devastated to learn that 11 children we were helping with trauma were bombarded while they were at home and thought they were safe,” said NRC’s Secretary General Jan Egeland. “They are now gone, killed with their families, buried with their dreams and the nightmares that haunted them. We call on Israel to stop this madness….” 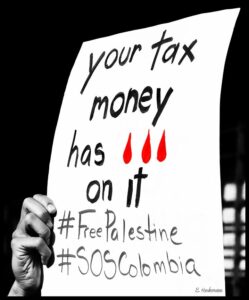 Of course, the list of reasons to refuse to voluntarily support the U.S. government with our tax dollars is long and extends far beyond the borders of Israel and Palestine. At our tax day demonstration people spoke of nuclear weapons, Yemen, endless war in Iraq and Afghanistan (including contractors who will remain even if US troops leave), war on drugs, drones, militarization of the police here at home, border walls and troops at the border with Mexico, the military-industrial-congressional complex — and more.

Tax day outreach in Brattleboro, Vermont, included asking passers-by “What do you want your taxes to pay for?” and creating this flower from the answers. Photo thanks to Lindsey Britt.

On the other side, the list of services that need our redirected tax dollars is equally long. All of us love to imagine a world where those billions spent on war could be used instead to heal the wounds of war, take care of people, work to reverse the climate crisis.

It felt good to be out in the streets making our protests to the public and supporting each other, even as I fight the urge to throw up my hands and bury myself in novels as the wars rage on and the bodies of so many innocents of all ages pile up. 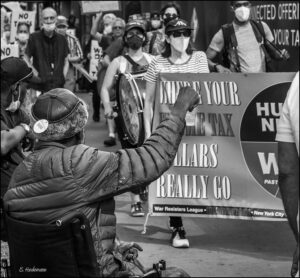 The support of passers-by is heartening, as are some of the newer voices in Congress calling for dramatic change in U.S. policy with Israel. I don’t know how much effect our marching about has, but I know we can’t stop trying to end the killing of children with as many of our nonviolent methods as possible.

One thought on ““Watch Your Taxes””