Note: This piece by NWTRCC coordinator Ruth Benn was originally published in the February/March 2009 edition of NWTRCC’s newsletter, More Than a Paycheck. We still operate the War Tax Boycott site and you can still sign on to the boycott. The flyer, using an older image by artist Doug Minkler, developed for Northern California War Tax Resistance, was created this year in response to Israeli attacks on Gaza. 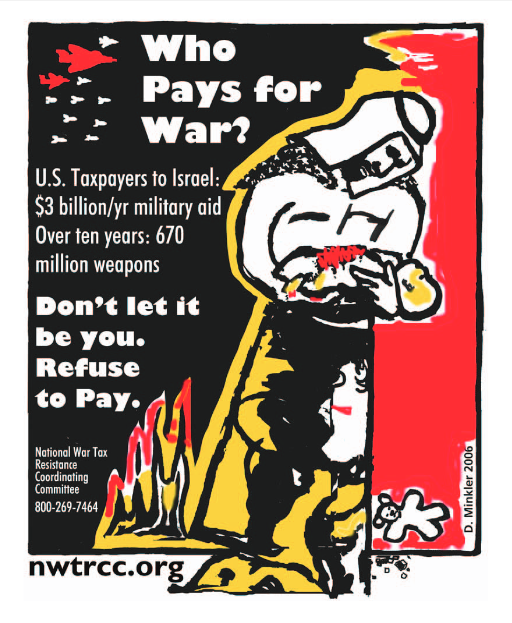 Printable flyer for distribution at protests.

Today I got out the notebooks and photos from my first trip to Palestine and Israel in 1988 at the time of the first intifada. I was on a human rights tour with the American-Arab Anti-Discrimination Committee. The goal was to show U.S. activists the view from occupation and for us to bring that information back home.

With Gaza under attack, that trip has been on my mind. In particular I wanted to look up my notes from a meeting with a lawyer (a young man then, but is he still alive?) at the Gaza Lawyers Association whose words led me to increase my war tax resistance.

“Watch your taxes. Don’t kill the kids. Don’t participate in this.”

His three simple phrases ring all too true today. U.S. aid to Israel, along with all kinds of loans and weapons deals, allows the occupation to continue. I was truly horrified at seeing firsthand a military occupation and to get a taste of the daily humiliations that are an aspect of controlling a population. On a few occasions our group was also the target of stones thrown by Palestinian young people who saw us as the enemy.

Sometimes it seems that the cycle of violence has cycled around so many times that it might be impossible to find the way out. I just want to shout at all the soldiers and fighters, “STOP IT.”

But there is always more to the story, and the U.S. desperation for a toe-hold in the Middle East is a powerful factor behind the intractable appearance of this conflict. When I came home after that trip in ’88 I changed my W-4 in order to stop paying 100% of my federal income taxes. Up to that point I had been refusing a percentage of whatever was due, but I could no longer stomach supporting militarism by writing a check of any size to the U.S. government.

At the same time, I became more diligent at redirecting refused tax dollars to help victims of war, people working for peace, and other programs that serve humanity. Mine is such a small contribution given all the desperate needs around the world, but it is my way of shouting for change.

Does the government hear me? I think so, but they don’t like to talk about tax resistance because they don’t want more people to realize they can choose how their money is spent. And, it takes more than our separate voices to really force a change in priorities at the highest levels.

Whether your resistance, or consideration of war tax resistance, has been motivated by violence in the Middle East, Latin America, Africa, Southeast Asia, or the lack of services here at home while the government builds more weapons, I hope that we can amplify our shouts through the 2009 War Tax Boycott and redirection. The longer the list of public signers to the Boycott, the louder that shout becomes.