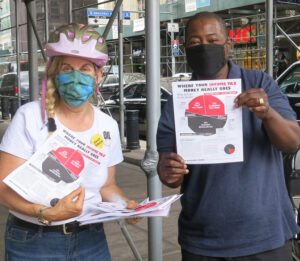 Tax season is here — well, almost, since the IRS announced that filing can start on Feb. 12. Now is the time when many of you start asking War Resisters League when the new pie chart flyer  will be ready. Hopefully you will be making plans for a safe and socially distanced public presence of some sort on tax day 2021, still expected to be Thursday, April 15.

As you may recall, tax day 2020 was moved to July 15, and WRL ended up with lots of leftover pie charts because leafleting was limited or curtailed by pandemic concerns. Note that the back of last year’s pie chart was a call to Abolish Nuclear Weapons to mark the 75th anniversary of the bombings of Hiroshima and Nagasaki. Its demand that the United States disarm under the now-in-effect UN nuclear weapons ban treaty is urgent.

This year expect a delay in production of a new pie chart. While the government is supposed to release a budget for the next fiscal year by the end of January, a new administration usually takes longer. As of this writing the Office of Management and Budget has no date for the budget release, although an announcement of a projected date from the Biden administration should make the news.

Meanwhile, the internet remains a wealth of useful statistical information. I ripped out an article a few months ago referencing the Social Progress Index designed to “provide decision-makers and everyday citizens with the very best data on the social and environmental health of their societies and help them prioritize actions that accelerate social progress.” The 2020 analysis shows the U.S. rank at 28 out of 163 countries, not a sterling showing, and one that has been dropping since the first index in 2011.

When you and I read that ranking, we know where to lay the blame: massive military spending that sucks up dollars, resources, and lives that could all be put to positive use. This page in the New York Times a few years ago had some great graphics to answer the question “Is America’s Military Big Enough?” 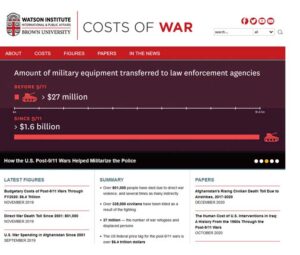 The Cost of Wars Project based at Brown University makes for a sobering visit. Their goal is to “to facilitate debate about the costs of the post-9/11 wars in Iraq and Afghanistan, and the related violence in Pakistan and Syria.” They outline costs in human, economic, and social & political categories, reminding us to focus not just on money but on the more than 800,000 people who have died since the U.S. attack on Afghanistan October 7, 2001. And, they bring it home with a recent paper titled, “The Wars Are Here: How the United States’ Post-9/11 Wars Helped Militarize U.S. Police.”

Finally, I often find myself going back to the National Priorities Project site, especially the interactive “Trade Offs” page. Set it by state or for the United States and see what taxpayer money spent on nuclear weapons or a list of other military expenses would buy instead. How about over 600,000 scholarships for four years of college instead of one year’s cost of nuclear weapons. That might help push the U.S. back up on the social progress index!

Before getting too caught up in numbers, though, let’s remember that for many of us, the reason we resist war taxes is not because this or that percent of federal income taxes pay for wars and military, but because any amount spent by the U.S. on organized killing is abhorrent.