“We don’t pay taxes. The little people do.” 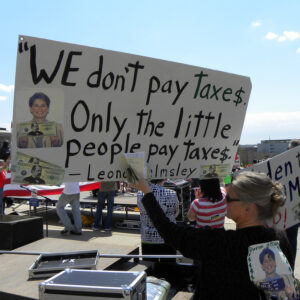 Photo of Leona Helmsley quote by Fibonacci Blue on Flickr

Much of the scandal around Trump and his taxes has less to do with how little he paid and more to do with how pervasive tax avoidance is among the wealthy. It is estimated that 70% of all underpayment of taxes is by the 1%. If they were audited or investigated by the IRS, the result would be $1 trillion in a decade. As it stands now, the area with the highest audits are in rural Mississippi where three-quarters of the population is Black and more than one-third live below the poverty line.  It appears that there is a two tiered tax system that is exacerbating the gulf between those who milk the system and those who pay into the system.  As war tax resisters/ redirectors, the central point is our objection to the fact that half of federal income tax goes towards militarism.  An earlier blog emphasizes the long haul nature of war tax resistance and consistent message. 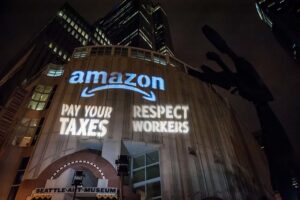 During the pandemic, 55 million people in the U.S. have lost their jobs, putting their health care and housing at risk. At the same time, 29 new billionaires have emerged in the U.S. and existing billionaires have seen their wealth grow by $845 billion in the first 6 months of 2020 and $10.2 trillion worldwide. Jeff Bezos, the wealthiest man in the world, saw his net worth increase by $72 billion so far this year at the same time that Amazon has been accused of price gouging up to 1,000%.  There has also been some attention in the news of Amazon paying no taxes. It is the system itself that allows the rich to evade their taxes and accumulate more money that places the burden on the rest of us. The failure of the wealthy to pay taxes forces everyone else to pay an extra 15% in taxes.

Profiteering Not Limited to the Merchants of Death

An earlier blog looked at the history of U.S. federal income taxes to pay for wars. During World War I and II, there were excessive profits taxes that were put in place to prevent war profiteering by individuals and corporations. The taxes varied but were put in place to ensure that wealth would not become concentrated in the hands of a few. In 1941, the Senate Special Committee to Investigate the National Defense Program, known as the Truman Committee, was established to eliminate waste, fraud, and war profiteering. They  saved an estimated $15 billion in taxpayer money by prohibiting excess profits.

The pandemic seems to be unleashing a profiteering craze. The Pentagon has been criticized for spending the $1 billion from the CARES Act on defense contractors instead of medical equipment.  The 2021 FY budget calls for decreasing the Center for Disease Control and Prevention budget by $1.2 billion while increasing spending on nuclear weapons by $7 billion. The National Defense Industrial Association, the lobbying arm of weapons manufactures asked the Pentagon to speed up the awards of $160 billion of unobligated Department of Defense funds to its companies, the polar opposite of the aims sought by the Truman Committee.

Trump COVID and the Football 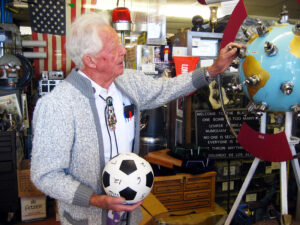 The Trump administration has requested $46 billion for nuclear programs in FY 2021 as they prepare to increase the new generation of “usable” nuclear weapons. A recent, article Beware of the Pentagon’s Pandemic Profiteers, notes that there is already a glut of $8 billion from the nuclear weapons program and the National Nuclear Security Agency has stated that they cannot absorb the money allocated into their programs.

Ever since Truman made the decision to drop the first atomic bombs on civilians, the U.S. has continued its policy of granting one individual the ultimate authority to potentially destroy life on Earth—unlike many other nuclear-armed nations. Trump’s COVID infection provides another reason why it’s time to retire the nuclear football: “Kicking the nuclear football down the line does not solve the problem and in fact it just shows how broken the system is.” Most other nuclear-armed nations take precautions to prevent this concentration of power as well as potential catastrophes with one  individual entrusted  with the “golden code.”

As Trump prepared for his helicopter ride to Walter Reed in front of all of the world, there were the valets carrying the nuclear football—we later learned that two of them had become infected with COVID-19.  It was the first time many of the public had seen the nuclear launch codes accompanying the man who had asked, “Why can’t we use nuclear weapons?” and “Why don’t we have more of them?”  The man with his finger on the button of the world’s largest nuclear stockpile would be given a cocktail of experimental medications with potential side effects of notions of grandeur. It all seems like Dr. Strangelove II with an unwritten subtitle.  Moments before publishing this news emerged that the Trump administration rejected a proposal by Vladimir Putin to extend the new START treaty by a year.  The treaty is set to expire in February. 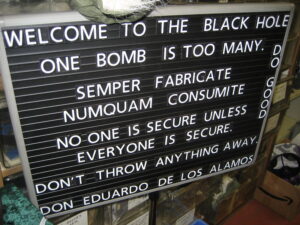