Like many of you, I found it easy to get lost in the Trump tax troves published in the New York Times last Sunday. I felt a feverish attempt to scour through it to find some of the starker elements and decipher how it relates to war tax resistance. Some of the long anticipated information that had been shrouded in secrecy was available to all. I was curious about the details of how the supposed “leader of the free world” was able to game the U.S. tax system, but I was also curious as to how the general public would respond to this new information. It seemed many realized that those with money bent the tax laws to benefit themselves.

2020 has revealed so much inequity within our society, especially related to class and racial justice.  Conversations around the injustices in which this nation was founded, with stolen land and stolen bodies that created the very wealth of those who continue to benefit, are more prevalent in the present than ever before.  Many will acknowledge that the United States was founded through revolution and tax protest,  yet do not see this as a participatory part of democracy even now when the very vitality of the U.S. and its inhabitants are at stake. 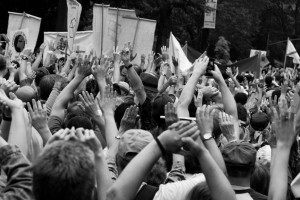 Following the American Revolution, George Washington proposed a tax on spirits to fund a policy of “assuming war debt” for the war that established the United States. It was the first time that Congress approved of a tax on a domestic product, which fomented the Whiskey Rebellion. The first income tax was placed on the population to pay for the Civil War in 1861.  Abraham Lincoln voluntarily paid income tax that was later returned to his estate.  There was much debate about the legitimacy of federal income tax. There were two types of taxes imposed: the poll tax or head tax for individuals as well as property taxes; the distribution of the taxes was related to each state’s population from the census. While there were income taxes imposed in the late 19th century to recoup costs from the war, it was not until Congress passed the Revenue Act of 1913 that federal income taxes were formalized. Teddy Roosevelt had pushed for a “progressive tax” in 1907, which would tax each income class according to its means. At that time a 1% income tax was imposed on net personal income over $3,000 and 6% on incomes over $500,000.

Following World War I, the top income rate rose to 77% to help pay for the war but in reality the wealthy only paid 15%. The percentages of taxes levied varied greatly following the Great Depression and increased dramatically at the end of World War II. At that time Congress introduced payroll withholdings and quarterly tax payments. Although income taxes were imposed to pay for wars, it was not until 1967 until Lyndon Johnson proposed an income tax “surtax” to pay for the Vietnam War; created an explicit “war tax.”

One of the most well known  war tax resister in the US was Henry David Thoreau  who spent a night in jail for refusing to pay for Mexican-American war and slavery.  His writing “Civil Disobedience” penned in  1847 continues to be an influential source of principled resistance tactics. While there were other examples of war tax resistance it was not until the dawn of the nuclear age that nationwide networks of  WTR were established. Peacemakers and the Committee for Nonviolent Revolution, the predecessors to NWTRCC,  were established in 1948 following a gathering in Chicago of  anti-war radicals. An article, “Hell No I Won’t Pay” by Kennett Love was published during the Vietnam War and included many of names of those who have paved the way with their principled approach to oppose paying for war. A.J. Muste penned a letter to the Washington Post to articulate some of those principles in stating that many came to WTR after “the ordinary channels of protest have been exhausted.” Many well known people signed onto the pledge at a time when there was little support for that position; they paved the path for people of conscience to rise above fear of the IRS and to simply paying for wars. While approaches to WTR vary, two common themes seem to be harm reduction, concern for those impacted from U.S. wars and the theft of those resources from our communities as well as an emphasis upon collectivism, devoting time, energy and resources into our communal needs.

Donald Trump’s taxes seem to epitomize the antithesis of the values of WTR. I originally intended to share some of the “highlights” of the Trump taxes, but then it felt more like regurgitating a tired, stale tale that would create more agitation than inspiration. Anger and fear can only carry us as far as it is ignited. I have been thinking a lot about language, especially as it relates to rejecting militarized language and focusing more on language that encourages action and inspiration. I continue to ponder Ruth Benn’s questions posed in last week’s blog. I have been pondering for much of 2020 how to encourage others to divest from paying for wars and invest in their communities as they are able. Many are seeing with new eyes in 2020; I hope that we are able to inspire others to take bold, creative actions rooted in uplifting life. 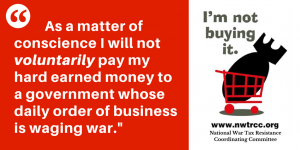 Here are additional sources of information about the conversations happening around federal income taxes:

A Brief History of the Taxpayer in Chief

Among the key findings of the Times’ investigation:

2 thoughts on “U.S. Tax History- It Doesn’t Repeat Itself, But It Often Rhymes”