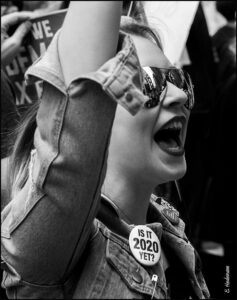 “What Will You Do if Trump Doesn’t Leave?” was the title of a September 3 op-ed by New York Times conservative columnist (but no fan of the current president) David Brooks. In it he says,

If Trump claims a victory that is not rightly his, a few marches in the streets will not be an adequate response. There may have to be a sustained campaign of civic action, as in Hong Kong and Belarus, to rally the majority that wants to preserve democracy, that isolates those who would undo it.

Letters-to-the-editor ran in response on Sunday, September 20. In one letter from a Stuart Esten in Burlington, Massachusetts, he dismissed legal action or street protests as being “hopeless” and “ineffective” respectively, but suggested:

So what can work? I’d suggest a one-word answer: strikes.

Labor strikes are a traditional form of citizen protest. A second form of strike — less traditional, more long-term and harder to organize — would be a tax payment stoppage.

To be effective a strike must have mass participation. Admittedly, engaging in any kind of strike means taking on real costs and risks.

Actively resisting an anti-democratic takeover of the U.S. government is not for the faint of heart. Remember, Mr. Trump has shown no qualms about inviting heavily armed street thugs to support his cause.

This brought to mind the rush of calls and emails to NWTRCC after the election in 2016, and especially after the inauguration when tax resistance suddenly seemed like a great idea to the masses.

NWTRCC received requests for presentations at meetings and workshops from all kinds of different groups around the country. Local groups found that their annual war tax resistance workshops were attracting a much larger turnout than previous years.

Some of our blogs from that era will give you an idea of what was doing on:

“Something has clicked in the minds of thousands of people across the country… we don’t want to pay for Trump’s agenda!” Feb. 2, 2017

Comments on the Feb. 23, 2017 post included: “Would NWTRCC be willing to spearhead a blitz movement to mobilize a critical mass of resistors by April 18?” 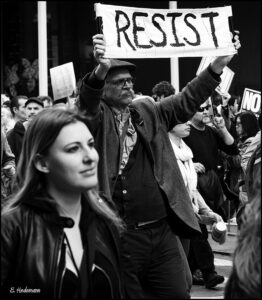 The big Tax March events in April 2017 demanded Trump release his tax forms; some among the marchers announced, “I won’t pay until he releases his taxes.”

One thing we learned in 2016-2017 is that NWTRCC is one of the few “kids on the block” with experience and knowledge about tax resistance, and a lot of people found our website.

So, should things go that way again, are we ready? And, if things go that way again, how do we really capture the energy? There’s not much indication that all that enthusiasm for a tax strike or tax resistance campaign in 2017 gained any traction. As the letter-writer indicates, this type of campaign is harder to organize, and NWTRCC is small. How to develop a campaign and sustain tax resistance is a perennial question for those in the WTR network.

But, if things go the other way, we will be facing a time when a lot of people who’ve been out organizing and resisting in one way or another will want to take a break, like when the “peace president” Obama was elected. Too many activists felt we had to “give him a chance” and stay quiet.

So this ends as food-for-thought, hopefully leading to some comments that will guide us into discussion at the November 6-8 NWTRCC virtual gathering, which falls after the election….but maybe before it is clear what we’ll be facing.

4 thoughts on “Planning Ahead”