Lots of people are looking for the basics of tax resistance — whether against war and violence, the border wall, closing the door on refugees, racism, a mass deportation force, getting Trump to release his tax forms, the Trump agenda in general, having a president that many see as unqualified, or some new executive order we might hear about next week. 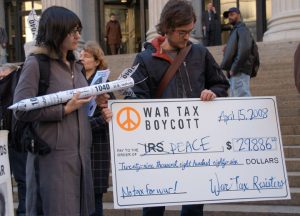 Tax day is April 18, 2017, the last day to file 2016 taxes. Whether you owe or not, whether you are resisting or not, here are some considerations and ideas for those newly interested in tax resistance as a protest strategy:

More webinars are coming up, watch Introduction to War Tax Resistance from Feb. 18 here, or see this page for postings of workshops around the country.