I recently read a guest editorial in my local newspaper that noted the startling fact that there is a “$437 million budget for the military’s 130 marching bands.” Setting aside the question of why each band needs to cost over $3 million, this fact got me interested in taking a look at federal budget priorities compared to mine.

As a Quaker (we are known for our peace witness and works), I have long been aware that the U.S. budget is heavily tilted towards war. The War Resisters League pie chart shows that military and veterans’ services totaled 48% of the 2018 U.S. budget. The National Priorities Project shows the 2020 budget as allocating 55% for the military. For this budget, I will include expenditures for Social Security and Medicare, even though these are not part of the normal taxes dues on April 15. When these are included in the federal budget, the military portion of the budget drops to about 23%.

According to the Congressional Budget Office, the federal expenditures this year will total $4.6 trillion (including Social Security and Medicare).

If I compare this country’s budget to mine (major items only), it would look something like the following. To make it easy, let’s imagine I have an annual income of $50,000. (Utilities are omitted—trying to match up utilities with the national budget was too complicated to be accurate.) 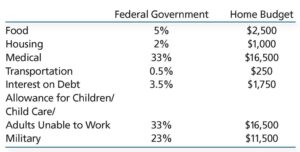 Regarding the 23% for the military portion of the federal budget, that means I’ll spend $11,500 for: 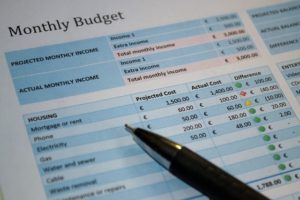 Image by Picdream from Pixabay.

Does this budget make sense to you? Does it match your values? Does it match the reality of your expenses (2% for housing, 5% for food, and 23% or more for security and fighting)? Shouldn’t our government share our priorities for using our money, since it is our money that “they” are spending?

Does this budget encourage the values you are trying to instill in your children? I don’t know about you, but I can’t afford to spend even one-quarter of my income on killing other people or dealing with the consequences of that. I don’t feel it makes me more secure. It makes me less secure, because when we threaten or harm others, they have the tendency to threaten and harm us in return.

“Do unto others” and “Thou shalt not kill” are universal concepts. Do we spend our money—earned with our energy, our time, our lives—in a way that reflects what we say we believe?

Look at what you spend most of your money on. What would our society be like if the numbers were switched around so the government prioritized housing, food, cradle-to-grave healthcare, and education?

How much of that $1.058 trillion military budget is actually making us safer? What might we do with even $1 billion dollars for peacemaking? Can we make a Department of Peace with equal funding as our combined departments for war?

Shall we dream big?