The president had a very isolating weekend, beginning with descending into an underground bunker at the White House and concluding with global leaders stating they would not be traveling to DC for the G-7 summit. Also, with the highest number of fatalities and cases of COVID-19, the U.S. was pulling out of the World Health Organization.  All week people were coming together to express their outrage at the brutal killing of George Floyd by Derek Chauvin of the Minneapolis police. The very protests emerging throughout the U.S. that were calling attention to police brutality as well as the 400+ year legacy of racism were met with increased militarization by the police and national guard.  The commander in chief was sending incendiary tweets, surrounded by some of the most armed men in the world, in a mansion built by black people held in bondage and forced into labor while the people of the world were uniting together to demand and embody a new vision, a new world. 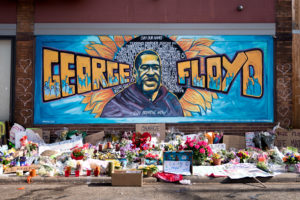 Trump began Monday by undermining existing global bodies when he called Vladamir Putin to invite Russia to join the summit that would expand the G-7 to be held in the U.S. later in the year.  Yet it was not until later in the day that some, including those from the military,  speculate that Trump finally crossed the line by using violence against  protesters outside the White House with chemical agents, sound grenades, and numerous armed agents in riot gear to disperse the crowd exercising their 1st Amendment right to assemble, so he could cross the street to have his photo taken with a bible. Retired Army General Douglas Lute said “There is a thin line between the tolerance we have witnessed from the military for three years and the point where it becomes intolerable…as the team walked across Lafayette Park with the president, they crossed that line.”  The team he was referring to included  Secretary of Defense Mark Esper, General Mark Milley chairman of the Joint Chief of Staff and Attorney General William Barr.

Shortly before crossing the street, Trump urged governors to use the National Guard to “dominate the streets” or he would send active military throughout the U.S. with the 1807 Insurrection Act. Later, the head of the Department of Defense told reporters, “I did not know where I was going.”  The New York Times explained, “he did not understand that he was symbolically embracing the use of American military forces…to suppress peaceful protest.”   Earlier in the day Esper, a former lobbyist for Raytheon, stated that the mission was to “dominate the battle space” and as the day was coming to close the White House was reminiscent of the fortified Green Zone in Baghdad. Trump was able to make it home with the assistance of a heavily armed entourage before the curfew went into effect in the nation’s capital.

After the sun had set, the National Guard, often used to respond to natural disasters, was sent to enforce the curfew and disperse the crowd. A Black Hawk and Lakota helicopter with a cross indicating it was a medical response and violating the Geneva conventions were sent in by the national guard to disperse the crowd. The pilots, who did not have experience flying the military equipment in a crowded metropolitan area, terrorized the crowd while flying low, stirring up debris and breaking trees.  This was part of the arsenal of the National Guards which included reconnaissance planes, armored vehicles, tens of thousands of pistol rounds, rifles and other weapons that were placed in storage at the DC Armory.

Almost all of the militarized factions of the US apparatus were present in DC including the FBI, ATF, Homeland Security (ICE and CBP), the Bureau of Prisons (specifically the ‘riot control’ sector who had been deputized to arrest protesters by AG Barr) and other unidentified federal agencies. The actions were unprecedented for the numerous agencies and led to confusion with different internal policies to guide their actions.

Trump has often boasted about the amount of taxpayer money he has allocated (more than was requested) to these very agencies which now was being seen more as a bribe, leading the top military officials across a line into a political position. Former Secretary of Defense Mattis broke with tradition and spoke out against the current military command, “We must reject any thinking of our cities as a ‘battle space’ that our uniformed military is called to dominate.” 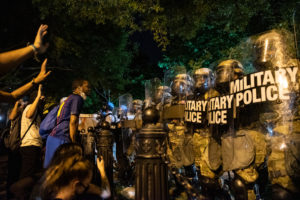 Line of protesters and military police in Lafayette Square commons.wikimedia

The line between the police and military have been blurring in recent years especially when approximately 20% of police departments consist of former members of the military.  A former sergeant states “The purpose of the military is to train soldiers to treat the enemy as inferior human beings or not human at all because that makes them easier to kill.”  Rosa Brooks writes in an article, “Stop Training Police Like They’re Joining the Military,” that she recognized that she was joining a paramilitary organization when training at the police academy in DC.

It has been important to hear from those in the military including someone who spoke on the condition of anonymity that “he was hoping to make it through another day without having to cite his constitutional obligations to decline an illegal order… although he would not be surprised if he faced such a dilemma in the coming weeks.” Family members of the military were joining the protest to “Condemn the use of military forces within the United States and described being stunned- and horrified- by the images from Lafayette Square.”  In 2016 Trump campaigned on the promise of bringing the troops home; little did know that in 2020 he would intend on using those very troops on US citizens.  He also promised to build a wall. We are witnessing that wall emerge in the isolationist US policies and literal fortification of the White House.