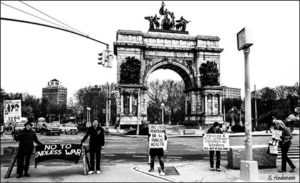 On March 19 — just last week before the state really shut down — our NYC War Resisters League group held vigils in three areas of the city. A few of us walked to the busy traffic circle at Grand Army Plaza in Brooklyn and stood with our signs to mark the 17th anniversary of the invasion of Iraq and demand an end to endless war.

Because there wasn’t much else going on, drivers zipping by and people walking in and out of the park turned their heads to see what we were up to. Despite some controversy in our group about whether protesting in a time of pandemic was a good idea, we got plenty of supportive honks and thumbs up. It felt important to take some time to get out of ourselves and remember the people in the world suffering under — and because of — U.S. wars.

It was easy enough to practice social distancing but have some social time too, although we weren’t as precise as the Rise and Resist protest on March 24.

Now, while mostly at home, we find plenty of things to do, but running out to a big demonstration is not one of them. This got me thinking about war tax resistance as a perfect protest for the isolated. That led me to think of the many individual acts of resistance in antiwar history and thus to Ammon Hennacy and his “one man revolution.” Fellow WTR David Gross has done extensive writings on this topic, and he sums it up this way:

This idea is that, contrary to what the organizers of the world are always telling us, the key to curing society’s ills is not necessarily to organize at all. You don’t need a majority, or a critical mass, or a disciplined revolutionary vanguard. Just get your own house in order and commit yourself to your own personal revolution — that’s the most crucial and practical thing you can do. 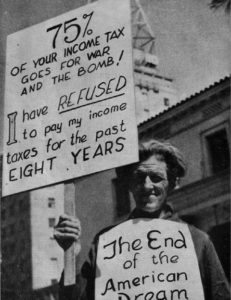 Now that so many of us have time to consider our own house (especially in the context of the lack of resources invested in healthcare) becoming a war tax resister/refuser/redirector might just move up on the to-do list for more folks – right in the comfort of your own home!

For many it can take years from the time they first heard about war tax resistance to actually do it. I had correspondence recently with a woman who was quietly on my local war tax resistance list for years. In early March I sent out an email about an upcoming workshop, and she replied that she’d love to come but she has moved across the country. She went on,

I would like to talk to an experienced counselor soon as I go through my
process so I can figure out how I can do this while minimizing my risk as
I try to quell the fears that have interfered in the past. I do have a taxable
income and I do have assets – a home, bank account & investments, and 401K retirement accounts. It’s hard to risk the little bit of financial security I have been able to establish. BUT I have long been distressed and conflicted by the violence that my tax dollars support. The other day I watched a film called The Report which is a dramatization about the Senate investigation into CIA “enhanced interrogation tactics” after 9/11.  It was a horrifying reminder of what I need to do. I will be continuing down this path.

In our correspondence I asked her about the impact of the pandemic in her new location, and among other things this prompted her to say, “Coronavirus will probably always be linked in my mind with my renewed interest in tax resistance!”

These days, as health systems in the U.S. and most countries can’t keep up with critical needs, the linkage to the trillions of dollars and mountains of resources wasted on military madness over the decades is more obvious than ever. The new War Resisters League pie chart is out and available in English and Spanish online, so another one-person action you can take is to share it on social media, download it and mail to elected officials, email the link to everyone you know demanding Pentagon money be shifted to human and planet needs.

WRL used to have a brochure titled, “If you think you’re too small to be effective … you’ve never been in bed with a mosquito.” Now’s the time to be that mosquito in the ear of those in power. Please add your ideas for one-person protest (if not revolution) in the comments section.

3 thoughts on “Protest in the Time of Coronavirus”