In the spring of 2019, the Trump administration asked $750 billion dollars for the military budget. The increase would fund the Pentagon’s capacity to provide and enhance domestic security. But just what does $750 billion get us? Where exactly does the money go? As we approach Tax Day and the presidential campaign heats up, it seems fitting to ask these questions. 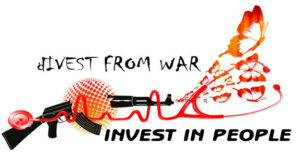 In May 2019, the Nation broke down military spending to better reflect just how much money the Pentagon is operating with. They studied the base, the war, the nuclear, the defense-related, Veteran’s Affairs, Homeland Security, international affairs, and the intelligence budget. Their investigation revealed that a large sum of the Pentagon’s budget is wasted. For example, the Pentagon is bursting with private contractors (currently there are more than 600,000 contractors at work). The Nation calculated that if private contractors were slashed, it would save $125 billion over a five-year period. The Nation determined that overpriced weaponry systems are another money suck. Spending included a $13 billion aircraft carrier and 200 nuclear bombers at $564 million a pop. Then there is the push to obtain long range strike weapons to deal with future potential wars in China and Russia, which is certainly a precursor to WW III.

Lastly, and to summarize on the military budget, there is a slush fund which solely pays for the “war on terror”—namely for U.S. presence in Afghanistan, Iraq, Somalia, and Syria. The slush fund is exempt from all caps on spending, even for investments in projects that have nothing to do with the current wars. In closing, the Nation calculated that with all the operating budgets under the purview of the Pentagon, military spending is $1.25 trillion. “If the average taxpayer were aware that this amount was being spent in the name of national defense—with much of it wasted, misguided, or simply counterproductive—it might be far harder for the national-security state to consume ever-growing sums with minimal public pushback.”

Sadly, defense spending and overall foreign policy has seen little attention from the current presidential candidates. Some, like Warren and Sanders, have more of a defined stance on addressing the budget-based corruption taking place in the Pentagon. However, it is uncertain if their proposals stand a chance in D.C. if they were elected.  Below is a summary of where the current candidates stand on the military budget:

Elizabeth Warren – Senator from Massachusetts. Warren was quoted expressing concern over the “coziness” between the defense lobbyists, Congress, and the Pentagon. She even referred to this triad as the military industrial complex—a term coined by President Eisenhower. She further stated that the military industrial complex “tilts countless decisions, big and small, away from legitimate national security interests and toward the desires of giant corporations that thrive off taxpayer dollars.” Additionally, she pointed out the weakness of current laws to properly combat the fiscal influence of military contractors at the Department of Defense.

Bernie Sanders – Senator from Vermont. No shocker here that Bernie tends to be a ‘dove’ as opposed to a ‘hawk.’ However, he was quoted saying that he believes in a “strong defense system for our country and a robust National Guard and Reserve that can meet our domestic and foreign challenges.” He went on to say that military intervention needs to be a last resort and to seek diplomatic alternatives whenever possible.

Joe Biden – former VP and from Delaware. Biden was quoted saying, “we can maintain a strong defense and protect our safety and security for less.” He does not speak so much of how much we invest, but how we invest the money. For Biden, he is looking to invest in more modern and progressive technologies that target space and cyber security.

Mike Bloomberg – former mayor of NYC. Currently, Bloomberg does not have a defined stance on defense spending. He shared that there is a need to re-assess spending levels.

Some good news: there is awareness of the discrepancies and corruption taking place at the Pentagon. With articles like the one in the Nation and even a presidential candidate referencing the military industrial complex, it is a sure sign that more and more people are becoming aware of the evils taking place at the Pentagon. We see that there are more conscious connections being made with how much is spent on defense and how much U.S. taxpayers are forking over to keep the cash flow going. With awareness we have power, and with power we have choice. So, with that I leave you with a few questions: What will you choose to do in your fight for justice? How will you exercise your power to better care for your neighbors, yourself, and the planet? If you believe one of the current candidates is a hopeful fit in tackling the military industrial complex, how will you hold them accountable to their word? You have power and a choice to make.