I did a presentation about war tax resistance before tax day to an antiwar section of the local DSA group, Democratic Socialists of America, a group that has grown like wildfire since the 2016 Bernie campaign. I gave a broad overview of the reasons, history and methods of war tax resistance, and we had a good amount of time for questions. I neglected to write up some notes during or after the session, but a few things that came up that still rattle around in my brain.

There were definitely people in the room who were interested in war tax resistance, or tax resistance in general, for personal reasons — thus the invite to speak. But like many activists, they are also looking for ideas for new campaigns. Many of them are interested in divestment, so I talked about NWTRCC’s Divest from War website and the idea of personally divesting from military spending vs. campaigns that ask public and private bodies to divest. I stressed that those of us in the WTR network are anxious to hear any campaign ideas and would love to join others to develop a campaign. 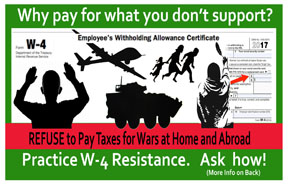 There was some skepticism in the room about the whole idea of tax resistance, but one person picked up on the fact that if you are getting a refund from the IRS it means you have given the government an interest-free loan throughout the year. We all hear people around us talking about how they wait each year for their check from the IRS and already know how they will spend it. (Although, as we know from the news this year, many people did not adjust their withholdings for the new tax law didn’t get the hoped for refund.) So anyway, this one guy in the group did suggest a campaign to encourage people to change their W-4s to at least cut off the free loan to the feds. Northern California WTR tried to promote this idea a couple years ago and it didn’t develop much traction but perhaps it’s something to look at again. (See the No. Cal. banner and flyer here).

Now might be a good time to put more focus on the excellent information NWTRCC has on W-4 resistance. Dave Gross’s blog refers to an article in Reason magazine, “Starve the Tax Man: Americans are increasingly reluctant to pay the IRS. Who can blame them?” When people ask me how many war tax resisters there in the U.S., I often say that the numbers of us who are public are pretty small, but I don’t doubt that thousands of people, especially under the current administration, are finding ways to at least reduce what they owe — and for reasons of conscience not just momentary anger.

Another question that was asked at my DSA presentation is whether certain communities would face tougher consequences of refusing to pay taxes than those of us in a more privileged white community. I do put out a warning that individuals who are not U.S. citizens might certainly face serious consequences for refusing to pay taxes. But more generally, I haven’t seen much in the way of solid statistics as far as the rate of IRS collection or criminal charges in communities of color vs. white communities. Perhaps some readers have more information. On the other hand, I don’t doubt that, as with any government power, I as an older, middle class white woman would be treated differently than a younger Black man. I just don’t know how that applies as far as the inner workings of the IRS.

The one blatant statistic that we’ve know about and that has been written about recently is that those who take the Earned Income Tax Credit — a credit specifically for the working poor — have a high likelihood of being audited. A December 2018 article in ProPublica detailed how the those who apply for this credit are targeted by the IRS.  Another statistic of interest to many is how the audit rates for millionaires and big corporations have dropped precipitously in recent years.  I really like the source that is linked there, Transactional Records Access Clearinghouse (TRAC) at Syracuse University. TRAC is an excellent research groups that has done their best to get data from the IRS over the years to produce reports like that one on audits.

So, I’m leaving these musings at that (after dashing this off late and rather quickly) in hopes that some of you might have ideas or information that will add to the discussion or lead to new materials or campaigns.