The trade war with China continues to fund real wars. Back in September, I wrote a blog post about the tariffs the United States has imposed on Chinese-imported goods. I have been reticent to write about this in the newsletter because the situation is in constant flux, which could make a newsletter article obsolete by the time it reaches your hands. But I do not want it to fall off our radar, so I thought I better compose a blog update for it.

Last week, Trump met with Chinese representatives to reach a new trade agreement. The current tariff list is almost 200 pages long, consisting of over 4,000 items. If an agreement is not reached by March 1st, the tariffs are supposed to go from 10% on many Chinese goods to 25%. If these higher tariffs are put in place, the generated revenue would replace almost half of the $130 billion tax cut that was implemented by the Trump administration. Even without the increase, war tax resisters might be unintentionally fueling the military budget by the purchasing of most Chinese goods. 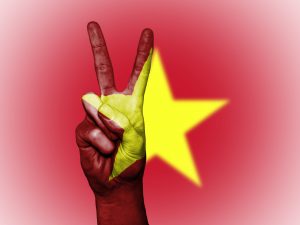 Though the two sides have not even agreed to a basic framework for the agreement, Trump is confident that an agreement will be reached. Even if an agreement is reached, Trump has indicated that he would like to keep some tariffs in place. As he told the New York Times, “Without the tariffs, we wouldn’t be talking.”

Although Trump may be optimistic, others are not. Fortune reports warehouses in southern California are “full to bursting with Chinese goods rushed across the Pacific ahead of President Donald Trump’s March 1 tariff deadlines.” American businesses were already rushing Chinese orders in anticipation of the original deadline at the end of the 2018. And the trend continues in anticipation of the March 1 deadline.

When the dust finally settles and we have a better idea of what which tariffs are staying in place and what is not, NWTRCC will produce a resource to aid WTRs in making informed decisions in what purchases support the war economy. Though this page needs use some minor updates, we already have a webpage dedicated to “Other Taxes” that support the war economy.

I have always tried to focus on purchasing locally grown and locally made goods. I believe it’s better for communities and for the environment to be more economically self-sufficient. These tariffs simply give me another reason to conform my life to the one I would like to be living.

One thought on “Chinese Tariffs for War Continue…”