At my very first NWTRCC meeting in 2008 in Eugene, we met a local couple who had resisted $50 of their taxes as their first foray into war tax resistance. Along with their return, and a check for the total tax amount minus $50, they enclosed a letter explaining their reasons for resisting.

Unfortunately, the couple received an alarming-looking letter from the IRS, accusing them of making a “frivolous” argument about why they weren’t paying their taxes. The letter threatened them with a $5,000 frivolous filing penalty if they did not re-file their taxes. Even though the couple complied, and paid the $50 they had resisted, the IRS fined them $5,000 each. Eventually, by contacting the Taxpayer Advocate and their elected representatives, they were able to get the fine dismissed. 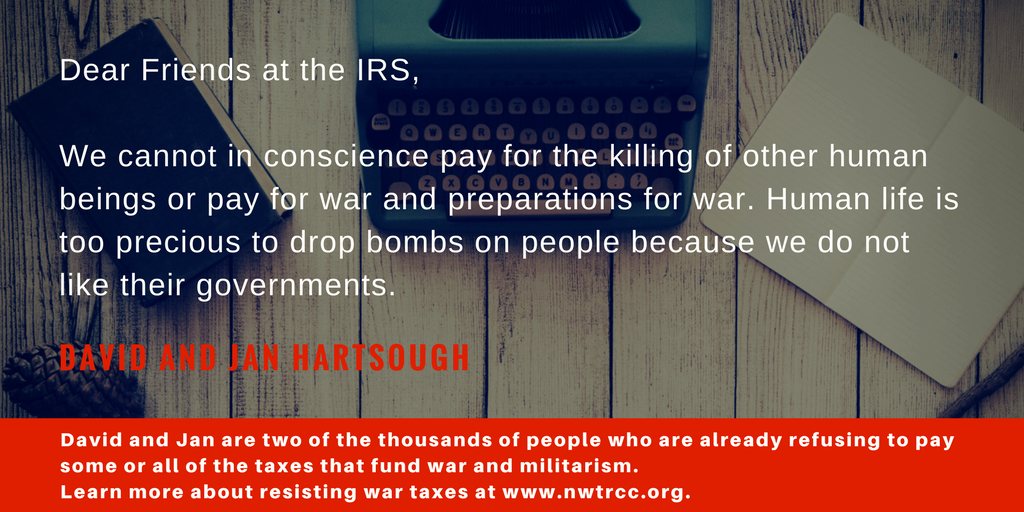 Today, as long as they don’t make arguments the IRS considers “frivolous,” war tax resisters enclosing separate correspondence with a properly filled out tax return are not supposed to receive a frivolous filing penalty or threat of penalty. (Read our page on frivolous filing for more details and links to other resources.)

However, in the 1980s, due to US military engagement in Central America, war tax resistance increased significantly. Many resisters were contesting frivolous filing penalties (which at the time were $500 rather than $5,000). In the Winter 1988 issue, the Conscience and Military Tax Campaign’s newsletter, Conscience, ran an article by Jay Sordean giving many statistics on the situation through 1985:

…As of November, 1983, there were 31 lawsuits being filed throughout the U.S. in response to frivolous fine penalties. As of May Day, 1984, there had been 8 losses, 5 settlements, and one win (the taxpayer had included a letter stating the correct amount of tax due with the “frivolous” 1040 form.)

By March 1984, approximately 4,000 to 5,000 taxpayers had been fined with FF, at least 130 of them being conscientious wtrs [sic]. Forty lawsuits against the IRS were filed.

By the winter of 1984, there were suits in all five IRS regions. The frivolous penalty has been assessed in an unclear, undefined and inconsistent manner. [my note: and this has held true to this day!]

One recent case was that of Vinton Deming, editor of Friends Journal, who was assessed a FF for filing an income tax return with an objection to war taxes. In the Federal District Court appeal attorneys Jay Rosner and Peter Goldberger negotiated a settlement. The $75 fee and court filing costs and miscellany were granted in cash by a Justice Department lawyer. The government didn’t want the case to be publicized, but the lawyers refused to agree to that.

If you’re a war tax resister with questions about your own frivolous filing penalty letter, read our page on this subject, which includes many more stories. Then contact NWTRCC or a local war tax resistance counselor if you need additional assistance or information!