by Daniel Woodham with Katherine Betts

This is the story of how 2 people formulated and carried out a gathering of people interested in learning more about how to not pay for war. It is easy to replicate, and so we offer the following details on how we did it – in case you want to do something similar in your town.

On a cool rainy day just before Valentines Day, ten people gathered in the social hall of a church that was kind enough to allow free use of space and audio visual equipment. Most people did not know each other but all seemed keen to know more about how to refuse payment for the increasingly war-like ways of the good ol’ USA. 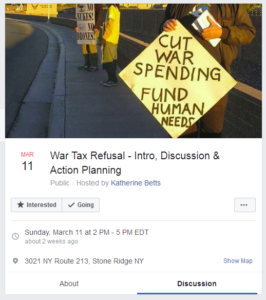 In preparation, we developed a flier, made copies and posted them in several small towns in the area, set up an email account for people to make contact with us, and found a space to hold our initial meeting. An event was created on Facebook. More can always be done with publicizing, but we can do better for the second outreach attempt as well.

Our flier had War Tax Refusal in big bold letters, stating that it was free and open to the public. Included in the event was a screening of Death and Taxes, the 6-panel display of the History of Conscientious Objection to Paying for War, and a review of levels of refusal and their accompanying risks. Discussion, Q & A and action planning rounded out the flier’s offerings. We included our new email account in case anyone had questions and NWTRCC’s website for more info. 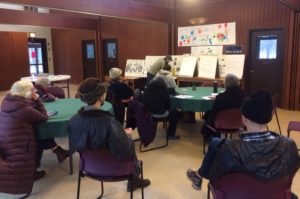 The actual program included welcoming people, giving them logistical info, and a brief outline of how we were going to run the 2-hour program. I included a 5-minute version of my personal “how did I get into WTR” story before the video, as I’ve found that this is one of the most poignant things to include in a WTR workshop. We then viewed the video, talked about low-to-high levels of refusal and associated risks, and did Q & A. At the end of the program people were encouraged to check out the literature table at the back of the hall. We also mentioned NWTRCC’s website, the WTR practical series, the handbook War Tax Resistance: A Guide To Withholding Your Support From the Military (available from the NWTRCC store), NWTRCC’s newsletter, area counselors, the national and international WTR movements, and the importance of having a local support group.

When at the end of the program we proposed starting a local support group for WTR and social justice activism, there was general enthusiasm and an agreement to set up a second meeting. With the sign-up sheet from the meeting we are now contacting people to set up our next program fixed for one month from the initial get-together. We have also sent out a reminder about upcoming social justice actions in the region people can attend.

You can contact Rise Up Hudson Valley, the host of this event, at riseuphv at gmail dot com. If you’re in the area, join them for their Tax Day event in Kingston, New York: