Today in the US, about 2.3 million people are incarcerated. The US has the highest rate of incarceration and the highest absolute number of people incarcerated of any country in the world. The prison system encompasses federal and state prisons, municipal jails, juvenile detention, and immigrant detention centers. (The euphemistic “detention centers” are still prisons.) Many prisons are operated by private companies that profit from saving money on prisoners’ basic and real needs. But government-operated prisons also fail to provide justice, rehabilitation, and basic services to prisoners. (For a couple examples of a general prison system critique, see The Case Against Prisons and No New Prisons’ Prison Facts page.)

Our NWTRCC field organizer, Sam, has been involved with the work of Decarcerate Louisiana from the beginning. This organization was founded by Ronald Brooks, a prisoner in the Louisiana State Penitentiary in Angola. Brooks has been incarcerated for about 20 years, including a lengthy stretch in solitary confinement. He wants to improve conditions and organize prisoners on the inside, raise folks’ consciousness and understanding of prison conditions on the outside, and create an organization that gets both groups to work together for justice.

A few months back, Ronald wrote to us (scroll down from the link to the Dear War Tax Resisters heading). Part of his letter read:

I am writing to you all because I believe you all are God-sent and are sincere in your efforts and work against systemic oppression levied against racial minorities and poor people. I am also writing because I am inspired by your commitment to redirect your tax dollars to black, brown, and indigenous people’s freedom and liberation movements [link added]. The stand you guys are taking is historic, heroic, and a blessing to humanity.

Being the founder of Decarcerate Louisiana and its number one supporter, an organization that advocates for the redirection of tax dollars from law enforcement and the prison system into community reinvestment, and the overhaul of our penal and criminal justice systems, it is fitting that I write to you all seeking friendship and connection for mutual support.

In recent communication, Ronald has reiterated his requests for support around outreach, fundraising, and more. 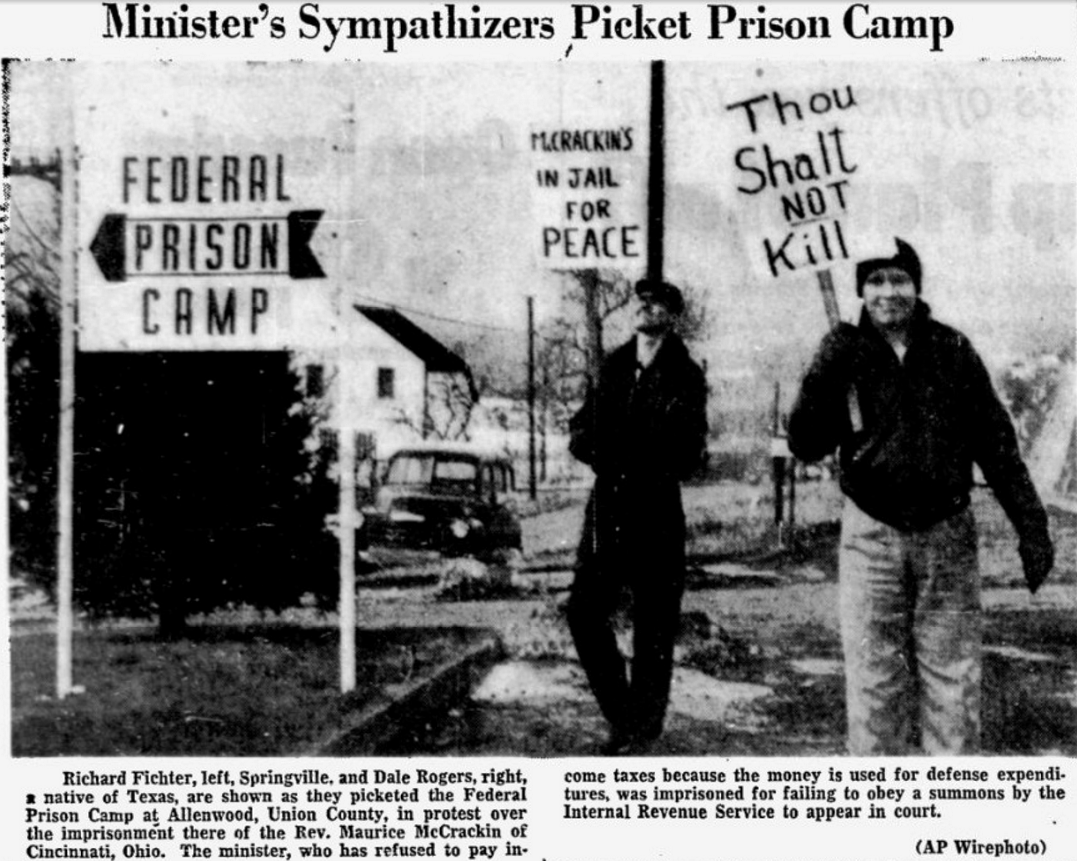 Sam pointed out that folks interested in war tax resistance are often dissuaded by their fear of prison. But just a few dozen war tax resisters have gone to prison for their tax refusal since the 1940s, compared to the 2.5 million people locked up right now. Sam said that getting to know people in prison helps build solidarity and challenge the narrative of “your life is going to end if you get locked up.” That fear can escalate such that people don’t want to start war tax resistance at all. Plus, war tax resisters tend to get fairly short prison sentences, in the rare cases they do go to prison. Compare this to the many people like Ronald Brooks who are locked up for decades or even their whole lives, long past any reasonable estimation of how long it takes to “repay their debt to society.”

Sam also pointed out that “military prisons are the most egregious of all prisons in terms of suspension of human rights and legal rights.” For example, see the inhumane treatment of whistleblower Chelsea Manning.

The percent of the federal budget that funds war, according to the War Resisters League pie chart, includes most of the budget for the “war at home.” (Although your opinion of how much of the government budget is war taxes may vary!). But there’s still more to do.

Prison divestment movements, such as the work led by Enlace, seek to get public money out of private prisons. Other organizations work to divest both money and resources and support from all prisons and toward restorative justice.