I’ve probably said this before, but it is rather funny how often discussions about war tax resistance lead to questions about banking. If you have a tax debt, having assets is, of course, problematic, and holding that money in an account with your social security number makes it vulnerable to seizure. 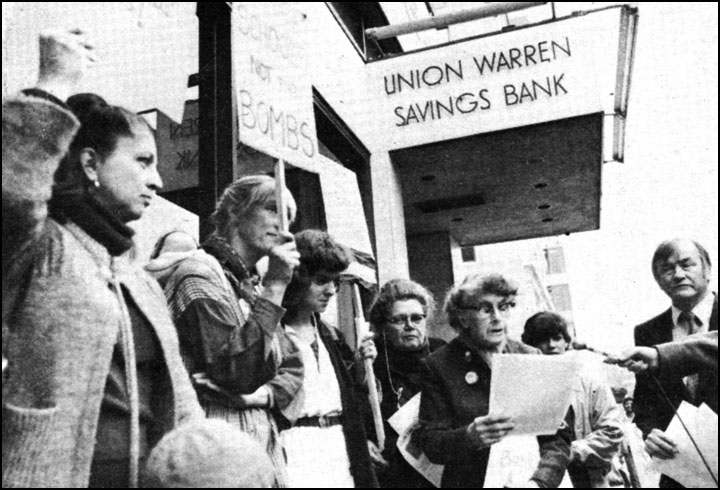 A no-interest account offers some protection, because U.S. banks report annual interest of $10 or more to the IRS — a direct link back to your bank account(s). If the thought of not earning interest pains you, check out Juanita Nelson’s essay “On Interest” — written a few decades ago but still important food-for-thought.

One of the positive side-effects of war tax resistance is that it can lead you to all sorts of alternative thinking and ways of living that are outside the mainstream. Discussions will invariably bring up considerations of credit unions, loans to community groups, living on cash, good banks and bad banks, etc. The protests at Standing Rock brought attention to banks and corporations that are invested in the Dakota Access Pipeline, and many protests were held at TD banks. There’s also Don’t Bank on the Bomb, which encourages investors to divest from nuclear weapons producers and investors.

I got into this blog on banking because I thought I had some new information that would help answer a frequent question: “What if I use a bank outside the U.S.?” Yesterday I read an article by some tax experts with a list of countries that exchange some tax information with the IRS and thought I had some clear advice. But, after doing more research, I realized I’d misinterpreted the article and how the rules impact U.S. taxpayers, which led me to get tangled up in way more tax code and international rules and regulations than I could comprehend.

I’m back to answering the question with “it might be harder for the IRS to know about the account but there is still some risk — especially for foreign accounts adding up to more than $50,000.” The latter requires an annual report to the IRS, and there are high penalties if the report is not filed. You can read about the Foreign Account Tax Compliance Act on the IRS website, but I also see that the “bad bank” TD has a pretty good page with the ins and outs for U.S. citizens setting up Canadian accounts.

Ok, that’s enough about banking — but I’m glad it gave me a chance to remember Cynthia Foster and use that photo! It reminds us to think about the potential of a public statement even when the IRS tries to quietly steal money from a bank account.

3 thoughts on “Tangled Up In Banking”