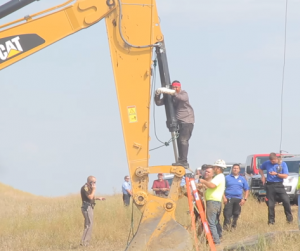 “Happi” American Horse gestures to supporters after locking himself to equipment in protest of the pipeline, August 31, 2016 / by Desiree Kane, CC BY 3.0 / Cropped from original.

Many of our readers have been following the water protectors’ struggle against the Dakota Access Pipeline (DAPL, or “the Black Snake”), which is being built on Standing Rock Sioux treaty lands. Thousands of people are on the ground in several resistance camps.

The combined police forces are cracking down on water protectors through surveillance (including drones), roadblocks, violent confrontations, dismantling campsites, and hundreds of arrests. They have employed heavy weaponry and armor, including LRADs (sound cannons), MRAPs (tank-like armored vehicles), riot gear, and sniper rifles. The police get this equipment from the 1033 program, which we have written about elsewhere on the blog. (See also page 8 of this newsletter.)

In addition, the North Dakota governor, Jack Dalrymple, has activated the National Guard. The National Guard runs the roadblocks and was also present at the October 27 confrontations in which over 120 people were arrested, using HMMVs (Highly Mobile Military Vehicles). The government (FAA) has declared a no-fly zone over the camps – police can fly their surveillance drones, planes, and helicopters over the camp, but water protectors’ drones are being shot down. (Update: the no-fly zone has been lifted.)

No-fly zones, surveillance, military vehicles, snipers… this is all sounding very similar to countless wars in the Middle East. And much more violence has been visited upon the people of Standing Rock. In particular, on September 3, 1863, the US Army killed hundreds of Standing Rock Sioux people, in what is known as the Whitestone Massacre. This was not an isolated incident, but one in a series of battles and atrocities against the Native Americans of the region.

In 1851, the first Fort Laramie treaty (the Horse Creek treaty) was signed between many indigenous nations, including the Sioux peoples, and the US government. But over the years, the US government chipped away at the treaty rights, leaving the Standing Rock Sioux and their neighbors a fraction of the original treaty land. (See #standingrocksyllabus for a longer timeline of events.)

Today, over 200 indigenous groups, as well as supporters, are working to prevent the Black Snake from crossing unceded treaty land. In this struggle for clean water, safe land, and treaty rights, they face repression from militarized police, whose ever greater weaponry and surveillance capabilities are enabled by the Pentagon (and its contractors).

For indigenous people, today’s militarized repression has roots going back hundreds of years, a painful history they cannot forget. Let the rest of us remember too – and work to end militarism in all its forms today.

One thought on “The military is at Standing Rock again”