In this month’s conference, I saw us wrestle several times with the definition of war. There hasn’t been a declaration of war for the US military in a long time. But we don’t need a declaration to see that what’s going on in Iraq, Syria, Yemen, and many other places is war. We even talked about whether our slogan “Divest from the Pentagon, invest in people” should say “divest from war,” to really emphasize in plain language what is at stake.

As Coleman Smith pointed out to our almost all-white gathering this weekend, we won’t look credible if we tell folks in black communities that the only wars are overseas. Police brutality, mass incarceration, and institutionalized racism as manifestations of a war on black people in the US. (The “War on Drugs” is itself a series of attacks on people of color.) Plus, the militarization of the police is a direct result of militarism. The wars abroad have been coming home for a long time (see page 8 at that link). 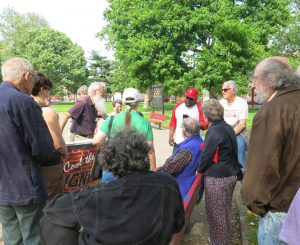 Our group gathers around Galen Tyler (in the red baseball hat) from PPEHRC as we begin our tour from Norris Square.

We saw another manifestation of domestic war on May 14, when we toured the Kensington neighborhood of Philadelphia with our hosts, Cheri Honkala and Galen Tyler of the Poor People’s Economic Human Rights Campaign (PPEHRC).

Kensington is not just poverty, Cheri was careful to explain; some of the world’s most caring and wonderful people live here. And yet, the barriers to their success are real. Every rowhouse is worn or crumbling; I can’t imagine that the insides of most of these houses are in better shape. Vacant lots are scattered around.

Along the main street, drug needles dot the ground. Several people we pass are obviously on drugs. Cheri told us that Kensington has the highest rate of drug overdoses of anywhere in the US. Many people come from the suburbs to buy drugs, further entrenching the drug market here and its impacts on the poor.

Walking around the neighborhood, my feelings of discomfort increased. Here we were, a rather conspicuous group of 20 white people on a poverty tour of a largely non-white neighborhood. I felt like everyone was staring at us. I have rarely felt more out of place or out of my element. However, PPEHRC conducts these tours 2-3 times a week to increase the visibility of their situation so that it can no longer be ignored (in addition to their work supporting low-income families and protesting for better conditions). Cheri likens these tours to the Zapatistas’ invitations for outsiders to visit Chiapas, to get as many outside eyes as possible on their struggle for autonomy and to increase the number of voices calling for justice.

Federal, state, and local governments are willingly allowing the crushing poverty and public health crisis of drugs to continue. There are enough homes in Philadelphia to house everyone; instead, PPEHRC activists are living in abandoned homes or struggling to make rent every month, living under the constant threat of eviction. Taxpayers hand over $1.5 trillion in war taxes every year; this must be enough to arrange housing, food, and drug treatment for everyone who needs it in this country (not to mention all the jobs such an undertaking would create). 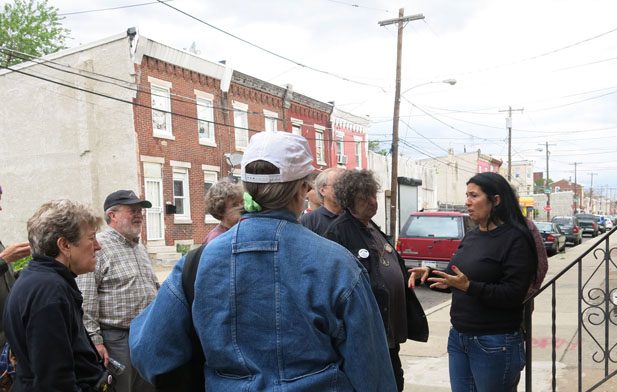 Cheri Honkala (right) talks to the assembled war tax resisters during our tour of Kensington.

Unfortunately our tour was cut short by rainy weather, so we didn’t get to see some of the great work PPEHRC and its friends are doing in Kensington, like their urban farm. (I also remembered that fellow war tax resister Shane Claiborne is a resident of the Kensington neighborhood with The Simple Way. I wished that we had been able to meet up with him or his community as well. Shane was part of the major housing occupation actions in Kensington in the 1990s.)

This tour had a major impact on me. I look at the depths of the war on the poor  in the US compared with the depths of the issues the US government contributes to through war overseas, and I know once again that it would be impossible for me to pay taxes for that. (Perhaps you’d like to join me to make a donation or send some resisted war taxes to the work of PPEHRC.)

Anyone else who was on the tour want to add their thoughts? Comment below or submit your own blog post!

P.S. We are looking for more guest-written posts for the NWTRCC blog! All posts should be 300-1,000 words and related to war tax resistance. Contact Erica at wartaxresister at nwtrcc dot org.

5 thoughts on “Which wars are we resisting?”