“In order that we may offer our fellow citizens an alternative by which their tax monies may be directed to the sustainment of life rather than its destruction, the PEOPLE’S LIFE FUND is established.”

Thus read the announcement of the founding of the New York City alternative fund in the August 1971 issue of Tax Talk, published by War Tax Resistance, the Vietnam War-era national organization that preceded NWTRCC. In the October issue of that year, Tax Talk included a page on Alternative Funds, explaining that “These are Funds whereby war tax resisters are pooling the money they have refused to give to the government. The money is rechanneled to local community groups.”

Of the 16 groups listed, two of those funds are active today under the same name: Northern California People’s Life Fund and New York City People’s Life Fund. The New England War Tax Resistance Fund dates their founding to 1969, although it was started under a different name. By late 1972 there were as many as 55 alternative funds around the country, and Tax Talk editors expressed the hope that the Funds “can be the political and moral force that will bring our government to a change of priorities.”

Today there are 11 funds in the NWTRCC network, but other sorts of alternative economic systems, like local currencies, time banks, freecycling, etc. (many described in our Practical #5, Low Income/Simple Living), have developed over these decades. Our Funds should be seen as a part of that network also. NWTRCC is also re-emphasizing the redirection side of our refusal to pay for war with the “Divest from the Pentagon, Invest in People” campaign.

This year more than $44,000 was “invested in people” by seven of our alternative funds, an amount multiplied exponentially by hundreds of individual redirections around the country. 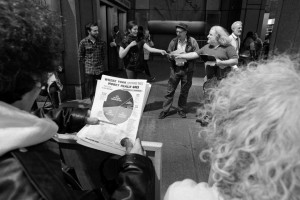 At the NYC redirection ceremony at the IRS.

New York City PLF announced grants to four groups during a vigil on April 18, in front of IRS offices in Manhattan. A total of $2,000 was given to four groups: Not an Alternative, an art and activism collective; BK Rot composting operation; The New Sanctuary Coalition of New York City supporting those resisting detention and deportation; and, The Peace Poets music and poetry collective. Photo by Ed Hedemann.

New England WTR was a cosponsor of a rally on a snowy and cold April 4 to protest General Electric, which is moving its headquarters to Boston tax-free. To the group of about 100 hearty activists, Mary Regan announced the alternative fund grants totaling $6,000 to local groups. She was surprised to be quoted in the Boston Business Journal: “Mary Regan of the group New England Tax Resistance, who told the Business Journal they believed that the $145 million in incentives, as well as the free rent that may be in the offing for GE, is money that should go toward public schools, public transportation and affordable housing, among other items they said were more deserving.” 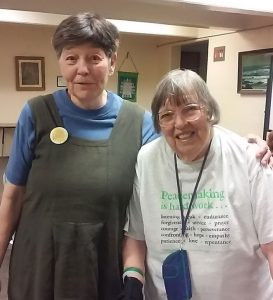 Pam Allee and Ann Huntwork at the Portland ceremony.

Oregon Community of War Tax Resisters, Portland, held their public redirection ceremony on April 19 at Augustana Lutheran Church’s Community Room. They pool their individual resisted taxes and ended up giving over $6,000 to six local groups, including Books to Prisoners, Food Not Bombs, and the Returning Vets Project.

Taxes for Peace Not War! announced the redirection of $660 by individual resisters at their downtown Eugene, Oregon, tax day rally. Groups receiving grants included 350.org, Stand for Children, the local chapter of the NAACP, and Occupy Medical.

Tax day reports and photos are on our website, and we’ll run more in the next issue.

Click here to read the rest of the newsletter! Subscribe to receive 6 issues per year via e-mail or postal mail.