Recently redmoonsong, who lives in North Carolina and is a committed war tax resister among her many other activities, sent the list below to NWTRCC with this note:

Here’s the page I mentioned to you on the phone.
One of the things I love about it is that each one begins with action (I really like action).
Although I’ve been reading this list for 15 years, I am still inspired by the intelligence, directness and succinctness of Lissner’s writing. 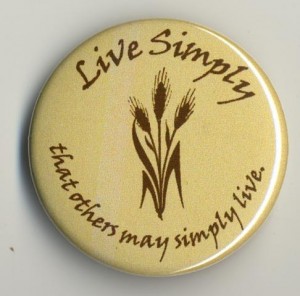 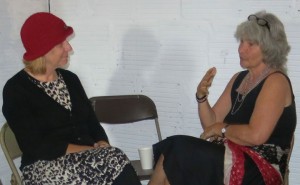 redmoonsong, right, with Cindy Sheehan at a war tax gathering in Asheville in 2013.

To save me from typing it, I glanced to see if the list was online, and found it on the website Simple Living Works!, which seems to be packed with writings, podcasts, and resources for people interested in this topic.

This list does not specifically mention simple living as a way of minimizing any contribution to the U.S. war machine, but there are plenty of people in our war tax resistance network, like redmoonsong, who chose simple living for just this reason. Among others, the name Charles Gray comes to mind even though I don’t think I ever met him. He lived in Oregon, and our friend Peg Morton always spoke highly of Charles, who died about 10 years ago. Inspired by Gandhi, he became a pacifist at the young age of 16, which among other things, led him to war tax resistance. There’s a nice tribute to him in the Eugene Weekly newspaper with a great subtitle, “The simply rich life of Charles Gray,” and a website about him that includes some of his writings too.