Despite the media focus on the Fight for 15 minimum wage protests around the country on April 15, it seemed to me to be a good media day for war tax resistance too. New resisters announced their commitment, while long-time resisters continued to speak up in opposition to military spending, in support of redirecting tax dollars, and in support of peace with justice. 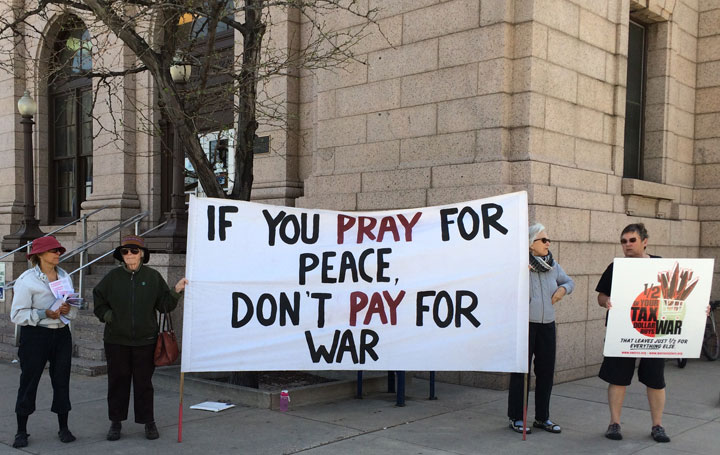 In addition, resisters and their supporters around the country redirected tax dollars, held signs along major roadways, and passed out literature about military spending and war tax resistance. We have heard of over $40,000 in redirections, but I am sure there’s a lot more that we haven’t heard about (getting war tax resisters to report their redirections being a little bit like herding cats).

A couple of days after Tax Day, Matthew Hoh was interviewed by Alyona Minkovski for the Huffington Post. Listen to Matt’s defense of conscience as a basis for war tax resistance, as well as a great shout-out to NWTRCC:

I continue to be very grateful to be part of the war tax resistance community and hope that the coming year brings more support and leverage to our movement.

P.S. Here are the full lists of 2015 war tax resistance articles and audio/video.