Since I was born in 1991, the U.S. Government has been in a non-stop state of war, and has spent trillions of dollars on killing people overseas.

As a young person growing up in the United States, I saw our schools faltering. I saw income inequality growing. I saw communities struggling. And yet, the government was spending more money on the military. 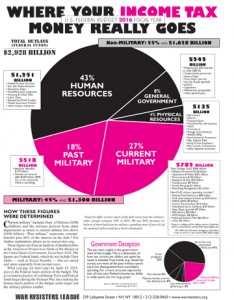 The United States spends more money on the military every year than the next 15 countries combined. The 2016 budget proposal includes $782 billion for current military spending and an additional $518 billion for covering past military costs, such as war debt. In order to pay for these expenditures, 45 percent of all income tax is proposed to go to the military.

To put that in perspective, in 2014, I made $16,000. At that rate, I would have to work 81 million years in order to make the same amount of money that the United States spends on the military in a single year.

If this money was used in other ways, we could do amazing things. The United Nations estimates that it would take only $30 billion per year to solve world hunger. This is 4 percent of what we spend on the military.

Changing our national priorities could mean more teachers, doctors, and social services. More resources in our communities that need them most. It means bringing our troops home, and ensuring that they have the necessary resources to fully heal from the physical and emotional traumas from the past 13 years of war.

The impacts at home are just the beginning. According to 2013 research from the University of Washington and Johns Hopkins University, the U.S. military has killed over 500,000 Iraqi civilians since the invasion in 2003. This is devastating. It is time for peace.

But, our elected officials are not heeding our calls for peace. Instead, they are discussing plans for an indeterminately-long war in multiple countries as part of the “war on terror” against the Islamic State. This war-mongering has to stop.

This week, I am saying to the U.S. government: No more war with my tax dollars. I am refusing to pay the $593 I owe in taxes, and have instead donated this money to important community projects including a youth-led farm, an environmental justice organization, and two community art projects.

Every year, tens of thousands of people in the United States practice war tax resistance, redirecting funds to social services and peaceful organizations instead of the military. I invite you to join me. To learn more, visit the National War Tax Resistance Coordinating Committee online at www.nwtrcc.org.

Sam’s essay has also been published in the Ithaca Journal.

One thought on “This Tax Day, A 23-Year-Old Refuses to Pay for War”