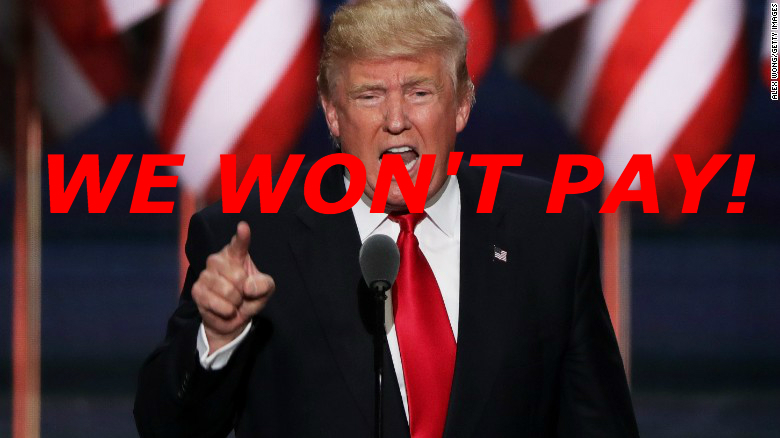 There has been renewed interest in war tax resistance following Trump’s inauguration. Something has clicked in the minds of thousands of people across the country… we don’t want to pay for Trump’s agenda! While many of the reasons people are fed up—extreme militarism, mass incarceration, police brutality, and mass deportations—are part of the foundation of our country, it is exciting to see many new people contacting NWTRCC and wanting to organize in their communities.

We have a series of webinars coming up in the next few weeks to support this new wave of resisters. Join us online to learn more about war tax resistance and our redirection effort for this year!

UPDATE: These webinars are over, but you can see recordings on our YouTube channel! And check out the analysis below by NWTRCC’s field organizer.

War Tax Resistance 101 will cover the history of war tax resistance, which modern taxes go to war and militarism, reasons to resist, and ways to resist. There will be time for Q&A at the end.

Redirecting Taxes to Black, Brown, and Indigenous Resistance! will cover the collective redirection initiative of war tax resisters around the country this year. It will also include information on the logistics of redirection, and how tax resistance can be a tactic for racial justice.

RSVP is required for the webinars; please register here.

NWTRCC is hoping to support independent organizing efforts as well as provide some vision during this period of increased resistance.

To help frame this time in history, I want to address the glue that binds the whole system together: white supremacy.

Whether we are looking at drone strikes in Pakistan, police killings in Philadelphia, or the national guard holding checkpoints out at Standing Rock, there is one common theme: our government is escalating violence against Black, Brown, and Indigenous People. This is not new—indeed, white supremacy and violence have been the bedrock of our country since its founding—but the Trump administration has taken the extra step to raise the thin veil, making the system of white supremacy explicitly clear.

During the first days in office, the Trump administration took a series of actions reinforcing white supremacy. While some of them were very well publicized, like the Muslim immigration ban, others were more subtle. One of the first things on the new White House website was a policy statement that read, “The dangerous anti-police atmosphere in America is wrong. The Trump Administration will end it.” This effectively put Black Lives Matter organizations and any group that is challenging racist police violence on notice. Then, just yesterday the administration approved the Dakota Access Pipeline, the path of which crosses directly through the territory of the Standing Rock Sioux tribe. 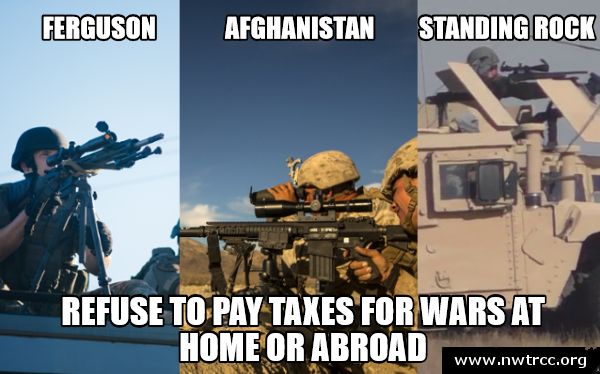 War tax resistance takes direct action to challenge this racist system. During a workshop I helped lead in Philadelphia last month, I was reminded of Wally Nelson’s saying, “What would you do if someone came to your door with a cup in hand asking for a contribution to help buy guns and kill a group of people they didn’t like?” But in my mind it shifted to, “What would you do if a random organization wanted to build hundreds of prisons, give people guns on the streets, build tanks and fighter jets, all to lock up, kill, and oppress Black, Brown, and Indigenous People?” We would see it for what it is—a white supremacist organization—and many more of us we would refuse to pay.

Tax resistance is just one piece of the puzzle though; redirecting that money is the next piece. This year, I am excited to announce a new initiative that war tax resisters are taking on across the country, to redirect tax dollars to Black, Brown, and Indigenous organizers who are fighting for liberation. To read more about this critically important effort and to get involved, check out our website! You can also join me for a webinar, Redirecting Taxes to Black, Brown, and Indigenous Resistance, that will be on Saturday, February 25th from 2 – 3 pm eastern time.

Onwards in the struggle together!

10 thoughts on “Upcoming Webinars on War Tax Resistance and Redirection”