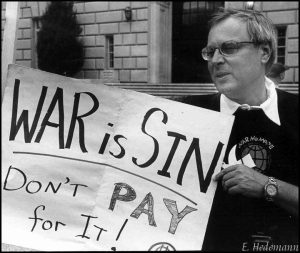 Reading my way through the New York Times one morning in May 2020, a photo caught my eye. It was a shot of a crowd from behind, but the one visible sign read “It Is NOT ok to Kill People.” The accompanying article was about the killing of Ahmaud Arbery in Brunswick, Georgia, and it immediately came to mind: who else would be holding that sign but Robert Randall? (He  chastised me in an email with, “I hope there are lots of people who would carry that sign!”)

Robert died on December 15, 2022, from pancreatic cancer, and his loss is a huge one for the war tax resistance network and for the ongoing struggle for peace and justice everywhere. Arbery was killed not far from Robert’s home, which brought that case of gun violence and racism right to his doorstep, but he was already active on many issues locally. As a friend Sandra Vaughn said in an online comment, “If he saw an injustice he fought with all he had to make it right.”

Robert was special to NWTRCC, and we hold him close to our hearts and send our love and thoughts to his wife of 46 years Linda Randall, who stood with him — at that Arbery protest, when their house was seized for nonpayment of taxes in 1984, through times when he lost jobs because of his resistance — through decades of life’s ups and downs. 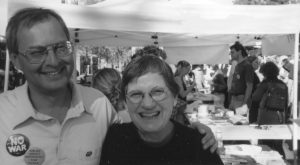 Robert may have recruited the most WTRs with his annual tabling at School of the Americas protests, Ft. Benning, Georgia. Peg Morton from Eugene, OR, joined him in 2004.

Robert became a Christian pacifist in the late 1960s while still in high school and in the face of the Vietnam War. “In those days a young person approaching the age of 18 simply had to think about whether or not to kill,” he said. It seems there was no question in his mind that paying for war was as impossible for him as being a soldier. He was a “war tax converter” all his adult life and got active with the Atlanta Tax Conversion Fund for Peace and Human Needs. They hosted a NWTRCC meeting in December 1983 that began his long association with the organization.

The December 10, 1984, Network News reported: “The IRS auctioned the house of Robert and Linda Randall on November 16 to recover Robert’s unpaid war taxes. The event received extensive and sympathetic newspaper and TV coverage in the Atlanta area. 20-25 supporters submitted protest bids and attended the sealed bid auction. …Robert felt very enthusiastic about the support he received throughout the experience.”

Being supported and being supportive was what drew Robert to NWTRCC, which is why we honored him at that 30th anniversary conference in 2013. Robert held the record for attendance at the network’s meetings and gatherings around the country. Sometimes he was on a committee and had his travel paid, but mostly he used his own resources because he appreciated being in a group where “everyone has shown what it means to live according to your conscience,” as he said in response to the award. Robert came to see friends, but was also the one most welcoming to all newcomers, as evidenced by comments on the war tax resistance listserve at news of his death. (As a matter of fact, one of Robert’s key contributions was starting and hosting that listserve, which has been valuable for conversation and support among resisters, refusers and converters since 1999.) 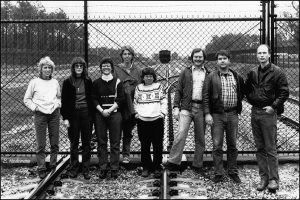 Most recently many peace activists met Robert through support for the Kings Bay Plowshares, who entered the Georgia naval base on April 4, 2018, and “beat swords into plowshares” at the Trident submarine base until arrested. Their trials, sentencing dates, and incarcerations in Robert’s hometown, Brunswick, involved more than four years of support actions and events with which Robert was fully engaged. But he had long been active around the Kings Bay naval base. In 1988 he helped host a NWTRCC meeting with John X and Martina Linnehan at their Metanoia House in St. Mary’s, Georgia, and took us to the gates of King’s Bay, a focus of their antinuclear protests. (He was so pleased to see John and Martina again in 2016 when they were living on land at the Sustainable Living Center of North Florida, which hosted a NWTRCC gathering.)

In May 1989 Robert helped host again at the Marywood Conference Center outside of Jacksonville. That gathering lasted nearly a week and included WTR events in Jacksonville, St. Marys, and Brunswick. Chrissy’s blog post from 2019 is another tale of Robert’s hospitality, but most of us who have attended NWTRCC meetings probably think of him as something of a host for every meeting no matter where it was. He was always the best prepared for the business meeting, he carried decades of institutional memory, and was fun to be around. His enthusiasm for post meeting outings, protests, or local tours was contagious. More than anything Robert knew that the primary reason people come together is to share stories and fears and ideas to sustain our resistance and survive the economic challenges.

There is so much more to say about Robert, and this blog page allows readers to add their own stories and comments. But it would be unfair to conclude without emphasizing Robert’s deep religious faith, even though it was possible to spend a good deal of time with him and not realize how central it was to his life choices. This is exemplified in his 2006 tax day letter to the IRS:

Once again this year I am unable to pay any federal income tax which you might deem “due” from me. As I have stated to you in years past, I am a Christian. …The Holy Spirit will not let me sin in this way. I am completely and utterly constrained by God from voluntarily paying for war. (Read the full letter.)

Robert was not a proselytizer. He was more concerned that we act on conscience than join a religion. He did, however, mean it when he wrote at the beginning of his “An Ethic for the 21st Century”:

Let us all agree on this one simple thing:
It is not OK to kill people.

P.S. We have so many photos of Robert at meetings, gatherings, serious vigils and serious fun from coast-to-coast and with many of you. If you want to see more, click here!