There has been a recent push advocating for a truce in the war between Ukraine and Russia. Advocates are asking for a cessation of violence from December 25 through  January 7. NWTRCC has blogged about the history of the Truce in World War I as well as other holiday traditions that celebrate peace at this time of the year, including John McCutcheon’s song about the Truce as well as a not so traditional holiday song “War Pigs.”

There is an immediacy this year to call for cessation of the war ravaging Ukraine and Russia for the past 11 months. It draws the attention of those seeking light in these dark days for those of us advocating for peace. Advocacy for peace is not limited to religious preference. NWTRCC encourages atheists, agnostics, Buddhists, Hindus, Christians, Muslims, Jews (believers and non-believers) to consider backing this effort. 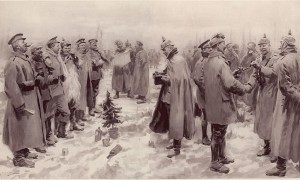 At NWTRCC’s conference at the beginning of November, a group war tax resisters attending that conference decided to start meeting to discuss how we could address the war in Ukraine. This blog post is one way our group plans to address that war. Acknowledging that there is no good war, and no possibility of a lasting military solution in Ukraine, we urge everyone to press for an immediate truce—a ceasefire that is a precondition for peace talks to begin.

We support a proposed Christmas Truce based on the model of the Christmas truce held in the Belgian trenches of the German and Allied armies more than 100 years ago. Some 100,000 soldiers on both sides of that conflict laid down their arms and spontaneously suspended their warmaking. 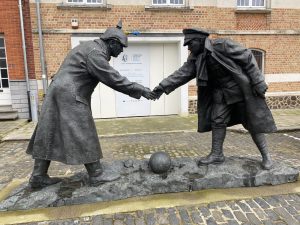 They moved toward one another into the “no-mans-land” between them, and sang  “Silent Night” and other hymns together.  They shared food and they prayed.  They even shared a game of football (soccer) as well as drinks.  They engaged with each other as fellow humans with families and dreams of the future.

Today, the U.S. peace movement is responding to this call for a Christmas Truce, as spear-headed by Massachusetts Peace Action as part of large peace coalition at www.peaceinukraine.org. The call is also supported internationally by International Peace Bureau in Berlin (IPB).

Please contact one or both of these organizations to sign on to this action for peace. Or write your own legislators to call for a ceasefire from December 25th through January 7th. This is the first and vital step toward opening the way to negotiations and ending the carnage.

One thought on “Christmas Truce Redux”