Editor’s note: This report by Cathy Deppe sharing her perspective inside Russia was published in More Than A Paycheck August/September 2019; it seems to be relevant today. Cathy is part of a NWTRCC group discussing the war in Ukraine and will be sharing more on the topic in the near future.

As Global Network members of an international delegation to the Russian Federation in May 2019, Alex Walker and I visited Moscow, St. Petersburg, and three cities in Crimea. We came to learn, to listen, and to build a bridge of friendship through citizen diplomacy. We had daily meetings with Russian journalists, activists, academics, and ordinary citizens. We gained first-hand information and historical perspective. The Russian people met us with warmth, openness, and generosity. 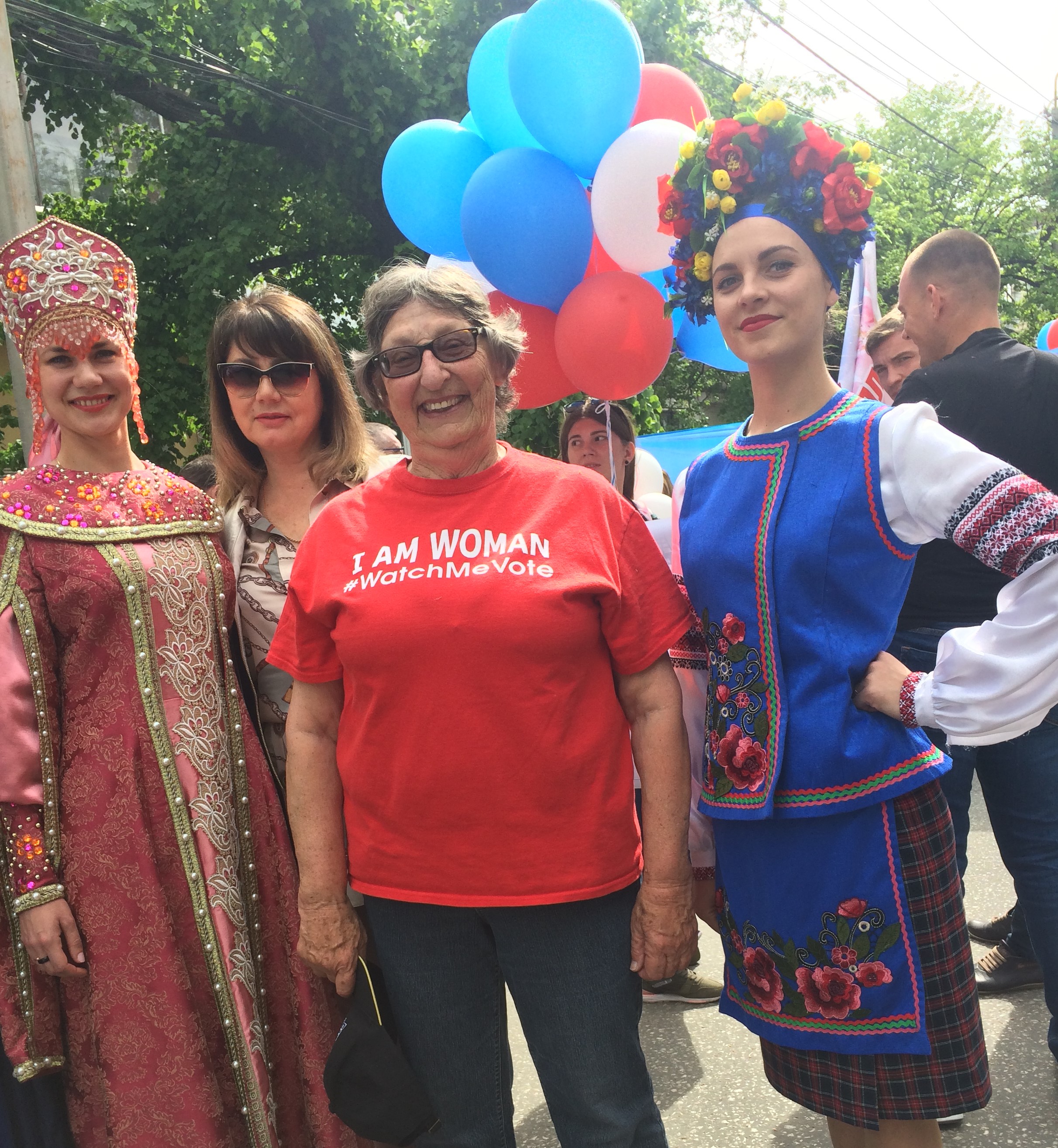 Cathy with May Day Marchers in Simferopol, Crimea. Photo courtesy of Cathy Deppe.

We came because we are alarmed by the U.S. demonization of Russia and by the NATO provocations which have created a world of increasing military confrontation, with the U.S. even threatening the first-use of nuclear weapons. Since the collapse of the USSR in 1991, U.S./NATO has encircled Russia with bases, so-called “missile defense” systems, and escalated “war games” right on its borders.

Our message is a call to end the demonization of Russia, remove U.S./NATO warships from the Black Sea, end the escalating war maneuvers on Russia’s borders, and build bridges of diplomacy and friendship. 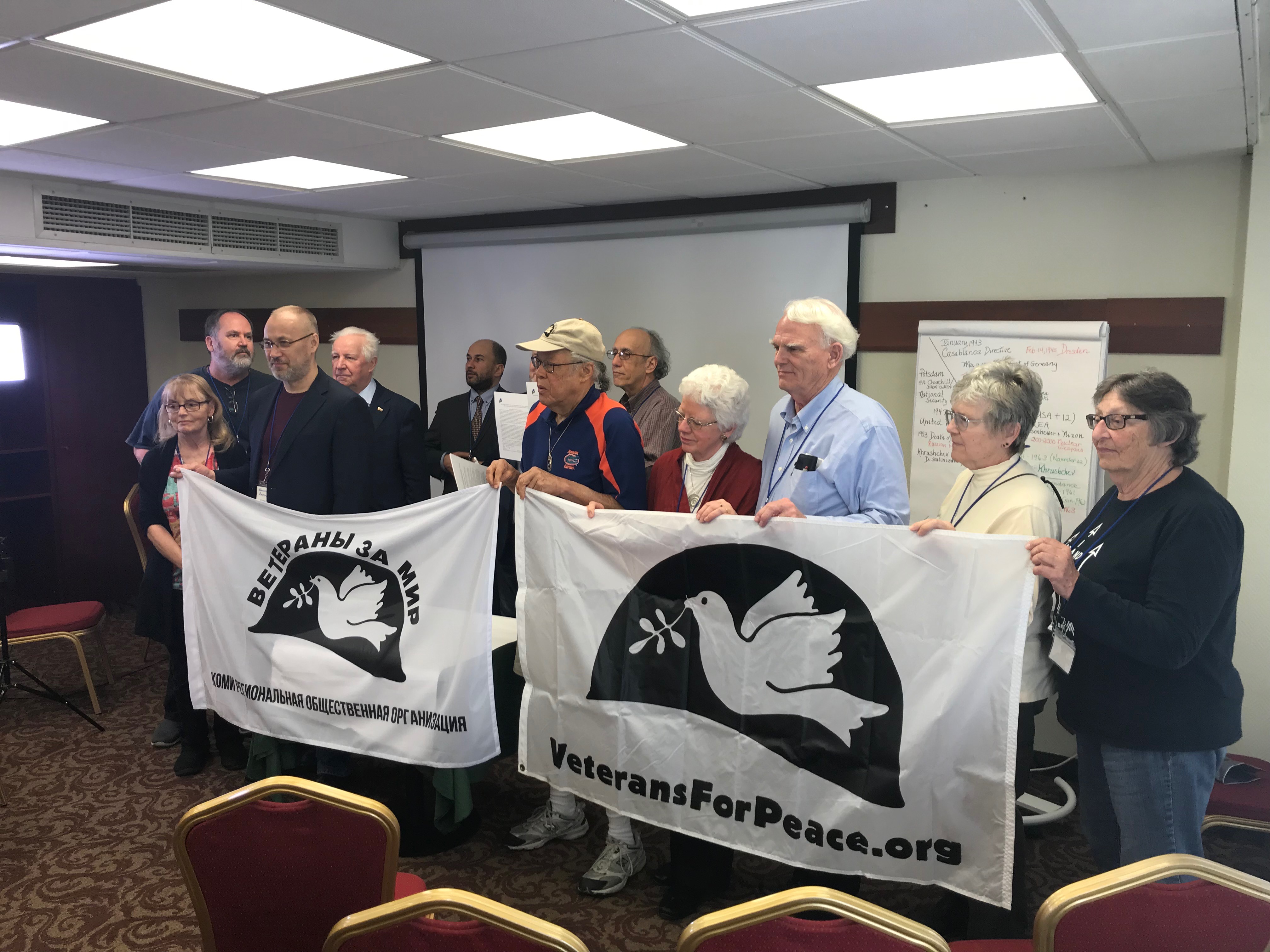 Russian and US Veterans for Peace Chapters Meeting together. Photo Courtesy of Cathy Deppe

One highlight of the trip was to hear from Alexander Pasechnik, the Chair of Russia Veterans for Peace in Komi, Russia. Afterward, we witnessed the signing of a Statement of Solidarity between the Maine, USA VFP Chapter and the Komi, Russia VFP Chapter. Our “citizen diplomacy” efforts at peace building had begun. In his presentation, Pasechnik focused on the “No First Strike” policy as rejected by U.S. Congress but implemented by Russia, and agreed on between Russia and China for years. Russia requires three persons to agree to push the nuclear button, but only one person, the U.S. President, is needed in the USA.

He said the U.S. President just signed a U.S. military budget approaching one trillion dollars, while the Russian military budget is only 47 billion, and that Russia’s percent of the total global GNP is only 2%, with an economy still suffering from past wars, with pensions and wages very low. For example, a Russian doctor earns only between $574 and $771 per month. Given their history and the current provocations of NATO on their borders, it seems clear that Russia will not hesitate to respond with the nuclear option in defense of the Motherland. I now realize how, given its long traumatic history of suffering wars, invasions, and occupations, the Russian people have an unbroken fierce determination to defend their homeland to the last breath.

The preceding is an excerpt from my personal report. It is quite long for this newsletter; therefore please follow this link to see my full report (nwtrcc.org/PDFs/Russian_Study_Tour.pdf). Thank you!

Cathy Deppe is a member of the Southern California War Tax Resistance Alternative Fund & has served on NWTRCC’s Administrative Committee. She lives in Los Angeles.