NWTRCC held its fortieth anniversary conference on Zoom the weekend of 4 – 6 November 2022. About 50 people attended some portion of the conference, which began the evening of Friday November 4 with a short concert with folk singer and political satirist Charlie King. He sang “More than Enough” by Robb Johnson, “Universal Soldier” by Buffy Saint Marie, and closed with a composition of his own, “Spoon of Sand.”

Following the concert, NWTRCC’s previous coordinators shared some anecdotes from their time with NWTRCC. Kathy Vass, who was the coordinator from 1982 to 1987 shared about the beginnings of NWTRCC and the arduous task of spearheading the composition of a war tax resistance manual. Larry Bassett, who co-coordinated with Kathy from 1984 to 1986, spoke of the daily grind during this time and shared about the significant amount of time that he stood next to a printer making copies of the WTR manual.

Mary Loehr, coordinator from 1999 to 2003, shared stories from NWTRCC gatherings and the fun that happened at those meetings. She also related that at an international meeting in Washington, DC, David Zarembka shared, “I have lost a house… to divorce.” Mary believed he shared this to indicate how precarious life is.

Lastly, Ruth Benn spoke, who was coordinator from 2003 to 2018. Ruth discussed the time she was asked to visit the IRS department that investigated tax protestor organizations. Right before Ruth was called in, the IRS had shut down one of the tax protestor websites. Thankfully, the IRS decided not to take any action against NWTRCC.

Panel on the Living History of NWTRCC

For our second Saturday session, we viewed a slide show to the music of Charlie King, in which fifty individuals who have passed away during the last forty years were remembered. After the eight-minute slide show, people shared stories about those in the slide show whom they knew and called forth of the names of those who were inadvertently left out of the slide show. After the additional names with photos are integrated into the slide show, it will be posted to NWTRCC’s YouTube channel.

To allow for some fun small-group interaction, we dedicated an hour-long session for trivia. Attendees were placed in groups of five, given some time to chat and catch-up, and then fifteen minutes to work together on a quiz. Lastly, everyone was then brought back to the larger group to find out the correct answers. If you were not able to participate in that session, the multiple-choice quiz from the session can be found beginning on the back page of this periodical. (During the celebration of our 40th year, one of our blog posts will be this quiz.)

Our marathon celebration concluded with breakout sessions in which small groups discussed possible directions for NWTRCC during the next one, five, or forty years. There were numerous calls for an official statement on the war in Ukraine, which came up again at the Sunday business meeting. (See the “NWTRCC News” section for more.) Felice and Jack Cohen-Joppa shared the success they have had with placing QR codes on protest signs on college campuses. NWTRCC will provide a way for Tax Day 2023 demonstrations to do this if they wish. 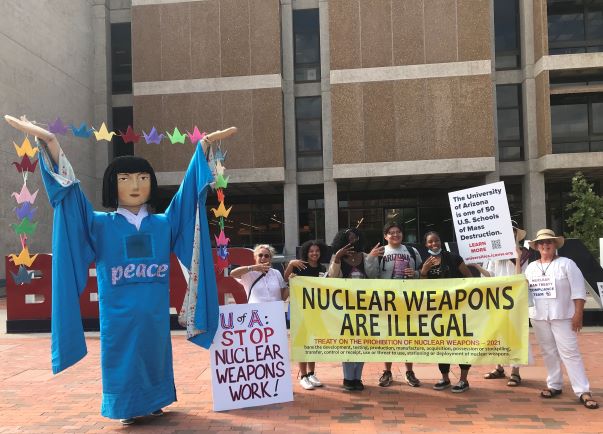 Recognizing the how white our group is, there were calls to continue connecting WTR with racism and earth work. Joshua shared his belief that there would be interest for war tax resistance among several independent media outlets. The NWTRCC office will look into this more during tax season. Other ideas were also offered, which will be brought to NWTRCC’s Outreach Committee for discussion.

Overall, it was a wonderful conference and we were very pleased to see so many people who played a role in NWTRCC’s history. It would be better meeting in person, but I am glad we were able to make the best of what technology has to offer.

One thought on “NWTRCC’s 40th Anniversary Conference: A Joyous Celebration of Resistance”