Utah Phillips begins a song: “One of the things you have to do in this world is to keep track of the people you owe.” Much of my understanding of working class struggles and people resisting injustice has come from song. Songs have the power to convey stories in such evocative ways that can elevate our collective narrative. Music has the potential to bring people together in a shared experience.  This war tax resister has learned so much from our movement’s folk singers, who are able to communicate the histories and  struggles of peace and justice that ordinary people who have taken heroic actions. 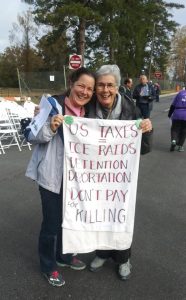 I met Utah Phillips at the School of the Americas (SOA) protests at Fort Benning, Georgia. It was there that I was also first introduced to war tax resistance (WTR). For many of us, the actions at SOA were our introductions to the global reach of what Eisenhower warned about the “military industrial complex.” The SOA trains soldiers from Latin America in using terror tactics against the struggle of ordinary people resisting oppression. At the time, I was awestruck by these members of Veterans for Peace, Raging Grannies, and others. We shared our stories, our literature, and inspiration for future actions.

It’s interesting to think of what seeds were planted from our sharing. It was after my first gathering at the SOA that I learned about the NWTRCC network and the power of nonviolent civil disobedience. We come at this work from different places, but sharing and learning from one another is what our movement is all about. It can revitalize, rejuvenate, inspire, and conspire us towards a new paradigm. 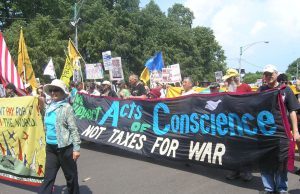 War tax resisters at No to NATO march. Chicago, May 2012. Photo by Ruth Benn

At the heart of this work has always been relationships with each other and ourselves, as we relate to and create the world in which we want to live.  It has been in knowing others’ stories and where they draw their passion that builds common ground and relationships.

In meeting Utah Phillips I had a chance to embarrass myself by gushing at him. He said, “Don’t do that to yourself.” It reminds me of a part of a poem that says, “Putting people on pedestals is a way of keeping them at a distance.” We are lucky to be among ordinary people doing extraordinary things. Recognizing each of us has talents, skills, and blessings to bring to our collective table.

In anticipation of celebrating NWTRCC’s 40th anniversary at our November conference, we are gathering stories from those in the network! There are prompting questions, but feel free to share your stories as you feel moved—WE WANT TO GATHER YOUR STORIES. One of the prompts asks you to share a memory from previous conferences. (You can find a list of meeting locations at the back of our handbook). We will share the stories that we collect in a special 40th anniversary edition of the October newsletter.

I am really excited about the November NWTRCC gathering and the program that has come into place with the help of the Ad Hoc 40th planning committee. You can check out the full schedule of events here. Singer/songwriter Charlie King will kick off our conference Friday evening! A request has been submitted for him to play this song—dedicated to you!