My older brother’s career and expertise is in the fields (literally) of anthropology and archeology.  He has done digs mostly in the Midwest, and funding for this work often comes from the civilian (presumably) budget of the Army Corps of Engineers, which is required to have land surveys done before they shift rivers, manage a flood plain, etc.

More recently he’s worked with a friend’s archeology company on some digs in the east, and in June he joined a survey in New Hampshire. Arriving at the site, he was surprised to discover that it was on a US Space Force base near Manchester. I, for one, had put that previous president’s space force out of my mind, so I was amazed to hear it is alive and well (I fear) in New Hampshire. Every day when the dig team got to the gates they were screened by fully armed, ready-for-combat guards who deployed bomb detectors to scan the underside of their cars, raising the question “what the heck is going on here?”

That base is called the New Boston Space Force Station, which took over an air force base in the summer of 2020. It is one of about 14 space force bases or stations around the country — plus one in Greenland. Presumably the funding for this archeology survey came right from the space force budget. We could hope the dig turned up something to stop the station’s development.

Feeling bad about having put the space force out of my mind, it reminded me to check out the website for the Global Network Against Weapons and Nuclear Power in Space, that excellent organization coordinated by Bruce Gagnon. The Global Network’s website is packed with important (and frightening) articles and information about the militarization and exploitation of space. I also happened on an August blog celebrating their 30th anniversary, so here’s a big shout out of congratulations to Bruce and everyone who has been part of their work over the years. 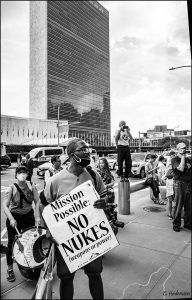 Recently I participated in a few demonstrations calling for nuclear abolition — weapons and power. On August 2, we were at the UN, which is hosting the Nuclear Non-Proliferation Treaty Review Conference, and took our demands to “stop talking and start disarming!” to the US Mission. On the anniversaries of the atomic bombings of Hiroshima and Nagasaki there were more vigils and press conferences. The Japanese and alternative press attended; the US mainstream media was nowhere to be seen.

Our anti-nuclear actions were grounded on saving life on earth, but between my brother’s story and the Global Network’s website I was given a wake-up call to what is happening in space. Karl Grossman’s article, “The Space Race is Going Nuclear” was especially enlightening, and he has also written a book on the topic. In addition, he is the author of a Beyond Nuclear handbook, The U.S. Space Force and the dangers of nuclear power and nuclear war in space (PDF). I appreciated the section headed “Why do we need a Space Force?” with the answer: “We don’t.”

My war tax resistance was inspired by hearing Dr. Helen Caldicott speak about the dangers of nuclear weapons. More than 40 years later the dangers are greater and the powers that be are constantly scheming and scanning for their next frontier to fight over. In this case, if they have their way, it really could be the “final frontier.” We have no choice but to keep up our resistance to militarism in all its forms and from the depths of the ocean to the moon and beyond.