The Russian invasion of Ukraine has brought the horror of war back into the forefront of many in the U.S. who never think about it. It has been easy for many to condemn the actions of a hostile, powerful, and well-funded military when it is somebody else’s. It is much easier for NPR and late-night hosts to talk about war crimes when the perpetrator does not live in the White House.

This war came at a perfect time for the U.S. government and war profiteering corporations. Just as military operations in Afghanistan were ramping down and there seemed to be fewer excuses to keep producing the weapons for war at current levels, a new war appeared in which U.S. soldiers are safe, but U.S. weapon manufacturers keep raking in the profits. 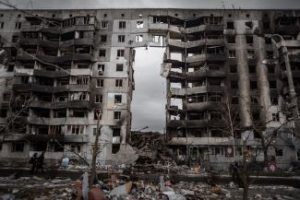 In April, the Pentagon hosted representatives from the top 8 U.S. weapon manufacturers to discuss whether they could meet demand for a war in Ukraine that may last years. Yes, the U.S. and its weapon manufacturers are planning for a war that will continue the hellish conditions in Ukraine for years. And the longer this war continues, the more likely that a line will be crossed leading to a direct war between Russia and the United States.

You probably already know that the largest-funded military in the world belongs to the U.S., whose military budget surpasses the budgets of the next nine highest-funded militaries combined. On a weekly basis—and often on a daily basis—the U.S. military is killing civilians using drones. This has not stopped during the war in Ukraine.

Although U.S. imperialism does not normally make headlines on the evening news, it is a reality that affects countless lives around the globe. With the help of the National War Tax Resistance Coordinating Committee’s (NWTRCC’s) wonderful resources, I have been able to refuse the payment of taxes that fund this imperialism for over 20 years. War tax resistance is also giving me tools to refuse paying for the kind of “aid” that sends billions of dollars of U.S. weapons to Ukraine and other war-torn regions.

I first discovered NWTRCC when I joined the Milwaukee Catholic Worker in 1998. Their bookshelf contained a copy of each practical booklet published by NWTRCC. A year later, attended my first NWTRCC conference, where I met some wonderful people from all over the United States who were refusing to pay for war. Although the conferences continue, most folks discover our literature online, with NWTRCC’s website receiving visits from 40,000 unique visitors each year.

I am very proud to be part of NWTRCC’s 40 year history, as well as part of the rich and diverse history of war tax resistance that spans diverse peoples and cultures throughout human history. If you are interested in learning more about war tax resistance, NWTRCC’s resources are all freely available at www.nwtrcc.org.

[Editor’s Note: This article was previous published in the summer 2022 edition of the Servant Song, the newspaper of the Agape Community in Ware, Massachusetts.]

One thought on “U.S. Weapons, Ukraine, and War Tax Resistance”