In these discouraging times for antiwar activists and humanity at large, it was good to be out marching around with like-minded folks and getting encouraging support from passers-by, including tourists from near and far. 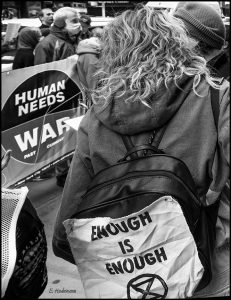 War tax resistance is a quarterly, paycheck-to-paycheck or even daily act of resistance to war, depending on your method, but it can be quite solitary. If nothing else, the annual tax day (thanks, IRS!) gives us a chance to act together.

This year our NYC WRL group decided to vigil at the IRS, which is in lower Manhattan, and add a short march down Broadway to Wall Street to take our protest to the corporate war profiteers. Then a friend with a foot in the antiwar movement and NYC Extinction Rebellion helped connect the peace movement tax day action to XR’s Spring Uprising week of actions. 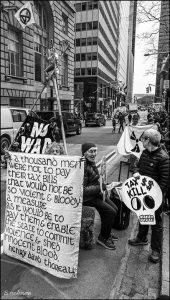 It was a lively affair this year, with a performance by a new street theatre group, Rising Together Guerilla Theater, and the louder demanding voices of more youthful XR activists leading the march chants. NYC WRL activist Mike Levinson spoke well for war tax resistance. The march ended at the Charging Bull statue where XR’s activists were blocking the road with tripods featuring “NO WAR” and “NO WARMING” banners.

Hopefully this will be the start of building an ongoing coalition that more strongly connects the crises of war and climate change.

But that coalition is still too limited. A week before our tax day march, the Poor People’s Campaign held a march on Wall Street as part of their Mobilization Tour for the Mass Poor People’s & Low-Wage Workers’ Assembly and Moral March on Washington, June 18, 2022. 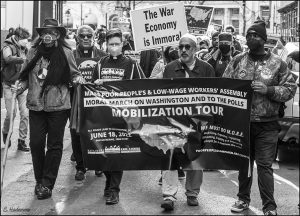 Many usual suspects from local peace groups were in the crowd, and the Rising Together Guerilla Theater did a trial run of their skits before the PPC rally started. But we are still working too separately on compatible but parallel paths at times.

Perhaps the fact that organizers of these two marches both chose Wall Street as a destination for protest is a sign that we are destined to pull together more closely and go after the corporations that steal from the poor and fuel war to increase their profits.

Activist Hideko Otake is a prolific chronicler of all kinds of protests in NYC. She has photos and video from tax day and also from the Poor People’s Campaign rally and march.