People are rising up and demanding action on climate change and a new vision for the world.  Tremendous sustained pressure is building on politicians to reset policy and save the planet. World leaders are set to attend the COP-26 Conference in Glasgow this week. Our collective action can tip the balance. Protest in the streets, letter writing, emails, phone calls, and of course withholding funding are all viable resistance tactics.

Within the last week, many of the departments of defense and intelligence have released statements about what they are doing to respond to the climate crisis. The reports they have shared state how they are addressing the issue for the first time yet they have been saying this for some years. Some 20 years ago, Donald Rumsfeld issued a statement about “Full Spectrum Dominance,” detailing how the U.S. was planning to extend their military domination of air, land, and sea into space with the creation of  a “Space Force,” a new branch of the military. All of this was detailed in a document, Joint Vision 2020, which also laid out some of the threats of the climate crisis including forced migration and conflicts over food and water. 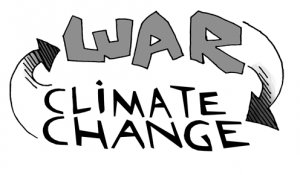 Despite this earlier document crafted 20-plus years ago, the National Security Council, the Department of Homeland Security and Defense, the Department of Defense, and the Office of Director of National Intelligence said it was the first time they have collectively communicated the climate risks they face when they issued their separate reports. According to the New York Times, the documents contain three key judgments: Global tensions will rise as countries argue about how to accelerate reductions in greenhouse gas emissions, climate change will exacerbate cross-border flash points and amplify strategic competition in the Arctic, and the effects of climate change will be felt most acutely in developing countries that are least equipped to adapt. 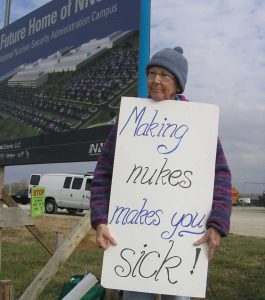 The same day that they issued their reports, top financial regulators reported for the first time how climate change was resulting in increased wildfires, hurricanes, and flooding that threaten the U.S. economy with significant changes in the way that real estate and other assets are valued. According to the New York Times “as of Oct. 8, there have been 18 ‘weather/climate disaster events’ in 2021 costing more than $1 billion each, according to the National Oceanic and Atmospheric Administration.” That NOAA was linked to the defense department reports may help illuminate a quandary of why a new NOAA facility was built next to the new nuclear weapons manufacturing facility, or as it is sometimes referred to as the Kansas City National Security Campus run by Honeywell.

The front page article in the New York Times detailed regarding the military and the climate crisis. Their research weaved a narrative of despair, perpetuating a notion of inevitability which will only lead to more destruction which we know happens largely as a result of the military. I am grateful to see people pushing back against that narrative especially those who are in who Europe currently strengthening alliances with other activists as they make their way to Glasgow. Some of the campaigns that they have been uniting on are anti-fossil fuel industries and anti-NATO war game exercises that include nuclear weapons and drones. 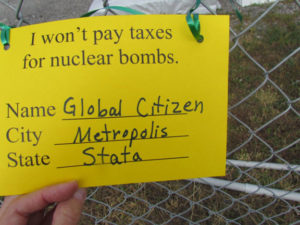 Direct action, hunger strikes, civil disobedience and withdrawing funding are all viable tactics that are being employed worldwide. Extinction Rebellion states, “Organizing is the antidote to despair. Fight for what you Love.”  Join NWTRCC next weekend as we explore collaborations in tax resistance with our European allies and find ways to explore how to support each other in addressing these times.