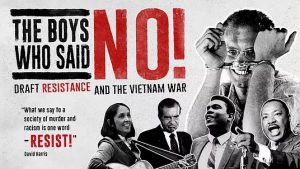 David Harris is one of the featured draft resisters and organizers in the recently released film, The Boys Who Said No: Draft Resistance and the Vietnam War, directed by Oscar-nominated filmmaker Judith Ehrlich. The film gives an overview of the draft resistance movement from 1965 – 1975 through the eyes of those who participated and those who were influenced by the resistance, with an emphasis on The Resistance founded by Harris and others in California. It honors a movement that helped inspire a wider antiwar movement, grew to include resistance within the military, and was a key factor in bringing an end to the war. 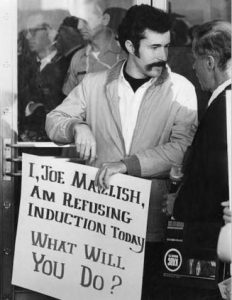 Still from The Boys Who Said No

For those of us of the Vietnam generation the film is both nostalgic and educational and full of amazing people we know or were inspired by. It’s a reminder of how horrific and wrong that war was — and how horrific and wrong war still is. It’s an incentive to press on with our protests of militarism and war.  Although tax resistance is not mentioned in the film, two in our network,  Randy Kehler in Massachusetts and Joe Maizlish in Los Angeles, are featured. Like many draft resisters, they went to prison for their refusal, but once that was over they realized they also didn’t want to pay for others to go to war. Their draft resistance was behind them but war tax resistance became part of a lifetime of war resistance.

The Boys Who Said No does an excellent job of showing the connections between the civil rights movement of the time and war resistance. Many of the draft resisters — both Black and White — had already been involved in voting rights demonstrations in the south. The famous refusal of Mohammad Ali to go “10,000 miles from home to help murder and burn another poor nation simply to continue the domination of white slave masters” is a moving highlight. I had not remembered that when the Student Nonviolent Coordinating Committee took a position against the war it caused an uproar from the civil rights leadership or about the Vietnam comic book that was created to outreach to young men in the Black community.

Although it took longer to end the war than any activist at the time hoped, the filmmakers want viewers to see the success of the draft resistance movement as a relevant model today. The film demonstrates how that personal and individual act of refusal — burning a draft card or refusing to step over the line at the induction center — inspired the Berrigans and others to burn draft files; Dr. Benjamin Spock to speak out in support of resisters and face a federal conspiracy charge; Daniel Ellsberg to release the Pentagon papers; and eventually massive actions in cities across the country, like the October 1969 Moratorium. A soldier in Vietnam represents the growing resistance within the military: “The Woodstock generation came to Vietnam. Killing for peace just doesn’t make sense.”

The effectiveness of the movement is also described in numbers, as prosecutions and imprisonments of draft resisters dropped over the decade, because the court system was overwhelmed, many judges were sympathetic, and public opinion had turned against the war. 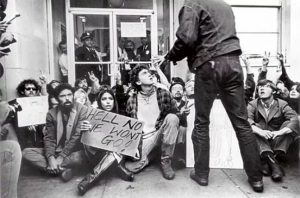 Still from The Boys Who Said No

One of my favorite stories in the film is told by Geoff Fishman who remembers getting his induction notice and heading to his appointment with no intention of refusing. At the induction center doors his bus full of young men was met by draft protesters holding signs and handing out leaflets. He took a leaflet and went in, but when it came time to cross the line and join the army he surprised himself by not taking the step. After that he found a welcoming community of support for his act of conscience. Harris says, “The longer we kept doing stuff, the more people kept joining us. The more that happened, the more people were able to stand up.”

The Boys Who Said No is packed with great quotes that I find especially relevant to encouraging individual resistance, like refusing war taxes. Randy Kehler, who spent two years in prison for his draft resistance, talks about his decision to send his draft card back with his refusal; he hesitates before letting it drop into the mailbox asking himself, “Is this what I want to do?” How many war tax resisters have hesitated as they mailed their tax return with no check and their “I refuse to pay for war” letter?

For so many of these draft resisters, the risk of going to prison was real, but those interviewed expressed again and again that time in prison was worth it if it helped bring an end to killing. In the film, Christopher Jones reads his statement to the court which ended, “Stop the war. End the draft. I refuse to register with glad heart.”

See the film and let it inspire your continued — or new or renewed — resistance to war. See the film with an organizer’s eye and consider how as war tax resisters we can take some lessons learned and build on them today.

The Boys Who Said No website lists current screenings and has a page where you can inquire about holding a screening in your community.