Three letters arrived from the IRS within a week of each other. On the one hand this is rather exciting since the IRS has been quiet for the last few years, and I haven’t had much to report as far as consequences of refusal to pay. At the same time, it could take months of correspondence to sort out what they’ve done.

The Notice CP23 that arrived at my door was titled “Changes to your 2019 Form 1040,” and the IRS made some income adjustment but the bottom line for any tax due didn’t change. The part that was annoying about this letter was the $435 “Failure-to-file” penalty, which seemed a bit odd since they were correcting the form that they had obviously received. I have never sent my forms by certified mail, so I have no proof of the date I filed but I am contesting this penalty. 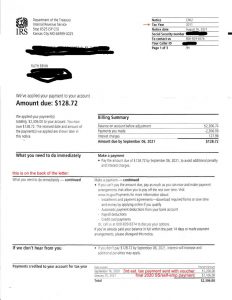 The next two letters arrived together a few days later and were somewhat more mysterious. It took me a while to sort out what the IRS had done. These were both Notice CP62, one for Tax Year 2011 and one for Tax Year 2012. The title on the letters says “We’ve applied your payment to your account.” Each letter showed a new amount due for that tax year. On the back was a list of “payments credited to your account.”

What the IRS did was take my estimated or final payments for Social Security/self-employment tax for Tax Year 2020 and apply those payments to 2011 and 2012 debts they say I owe.

This seems to be an improper (perhaps illegal?) effort by the IRS to circumvent the 10-year statute of limitations on collecting debt for those of us who file and refuse to pay.

I asked Lincoln at the NWTRCC office if he had seen anything about this, and he helpfully replied:

My understanding from court cases I’ve seen over the last few years (via Checkpoint Newsstand) is that the IRS can choose to apply funds to any tax year they want IF they collect the funds from you involuntarily. But if you are making a voluntary payment, which you were doing, then it’s your choice to choose to which year you want a payment applied. The cases I have seen were always rich people bringing the IRS to court over how the IRS applied involuntarily collected funds, so the plaintiffs always lost, but that’s how I heard about this issue.

And then he followed up with this find regarding “payment designation”:

I have written a letter to the IRS at the Kansas City office that generated these notices asking for the late filing penalty to be removed and then listing the payments that they misapplied and asking them to be correctly applied to 2020.

It might take ages to sort this out, so stay tuned for future reports, but if any readers have had this experience, please tell your story in the comments or feel free to email me.

Despite the potential hassles dealing with this, I am reminded of a pair of war tax resisters from years back who got a notice from the IRS and were thrilled. They had not heard anything for the first couple years of their resistance and felt they were being ignored. When I get nervous about seeing that distinctive envelope in the mailbox I remember them and it makes me smile. Resistance comes with consequences; we just hope that someday one of the consequences will be total redirection of the Pentagon budget to life not death.