This tax season, NWTRCC will host several online events and creating new online resources. We hope this will be useful to local groups and individuals in promoting war tax resistance. For example, the following events are planned for January: 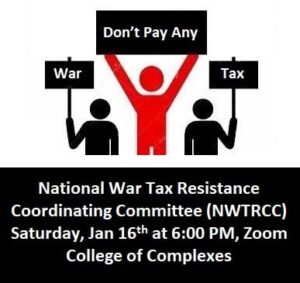 Each month of tax season has been given a theme:

In February, we will be launching a new web page that will more explicitly connect the militarism of local law enforcement in the United States with federal budget spending and priorities. February will also feature an online War Tax Resisters Counselors Training (Saturday February 20 at 11a Eastern/ 8a Pacific). This intense six-hour training will help us add to the list of wonderful counselors. Counselors are war tax resisters who volunteer to support existing and potential resisters by helping them to understand the motivations and methods of war tax protest, resistance, refusal, and redirection, and to understand the consequences of the choices they make. If you are interested in this training, contact the office at nwtrcc@nwtrcc.org.

Throughout this tax season, we also plan on posting short videos on four themes listed above. If you would be interested in creating a 2-5 minute video that connects your war tax resistance to one of the above themes, let us know! Also, let us know if you have any other ideas for the campaign or resources to share.

Mark your calendars: Our Spring National Conference will be online (April 30-May 2, 2021). We hope to return to in-person conferences in November.

One thought on “NWTRCC Campaign for Tax Season 2021”