As the spectacle of the departure of the 45th president unfolds, the unraveling of the U.S. Empire is witnessed by many watching under stay at home orders the world over. As the events unfold, my mind returns to Georgia and the incredible work of grassroots organizers to push for change in what became a linchpin in the balance of government. The accomplishments of largely women of color would become overshadowed by white men with guns.

My own journey towards justice began in Georgia and the grassroots organizing efforts of the School of the America Watch. Founder Fr. Roy Bourgeois’s words often come to mind that most  of the problems of the world boil down to “men with guns.”  It was at this place that I first met people who refused to pay for the plethora of weapons at the heart of the U.S. Empire. I picked up Why and How to Refuse to Pay for War as well as other NWTRCC resources. It was in Georgia where I was first exposed to the interconnections of the U.S. empire and the community committed to anti-militarism and anti-oppression work. 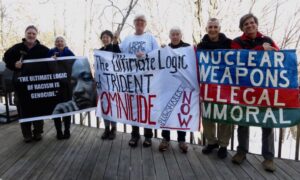 It was some decades into my war tax resistance that I met longterm resister Robert Randall who informed me that he was from Brunswick, Georgia “where nothing ever happens.” The  King’s Bay Plowshares trial last November brought me to Brunswick where Robert was helping coordinate the Festival of Hope to celebrate the work of disarmament. Throughout their testimonies, the activists spoke about drawing inspiration from those working against systems of oppression around what Dr. Martin King Jr. named the “triplets” of  militarism, racism, and excessive materialism. They brought their concern for life on this planet to the shores of Georgia where some of the Trident nuclear submarines are housed and have the potential to  destroy the Earth many times over. Their message was simple: “The ultimate logic of trident is Omnicide.”

Many point to the dawn of the nuclear age—the splitting of the atom—as the beginning of the unraveling of this country and a turning point for humanity. It has been difficult to envision the extent of the destruction that these weapons can cause as well as the death they are currently bringing about in the contamination of the lands, waters, and the beings inhabiting them. The trial those who had acted at the King’s Bay facility testified to the insanity of nuclear weapons and how the mere existence of these weapons are an act of and tool of terrorism. 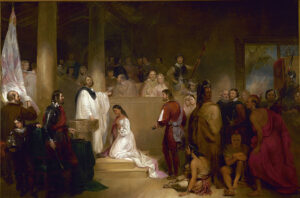 I found myself reflecting on my own and our collective journey in this country as I studied “The Baptism of Pocahontas” in the hall outside the Glynn County courtroom. The painting displayed both white supremacy and forced christianity that would plague this country. The scene from 1613 Jamestown, Virginia was a precursor to crimes against the forced transport of the enslaved to this very place a few years later. Over the years, those in power repeated a narrative about this country’s history and created institutions rooted in these false stories.

A few weeks after departing Georgia, 2 white men with guns felt validated in gunning down Ahmaud Arbery. It was months later before video was released and still longer before the men were arrested in the racially motivated murder.

After months of delays due to the pandemic, some members of the King’s Bay Plowshares were sentenced remotely this past November and some have begun their many months in prison. During the same days they were testifying of their love of humanity that motivated them to take action that risked prison time, the courts were hearing a request from the father and son who killed Mr. Arbery to be released from detention prior to their trial.

The killers of Mr. Arbery were to remain at the Glynn County jail where Fr. Steve Kelly has been held since the day of the plowshares action on April 4, 2018, 50th anniversary of the assassination of Dr. Martin Luther King Jr. At his trial, Fr. Kelly did not testify, in line with his conviction to not participate in the system which has often led to solitary confinement. I have wondered if he has had any conversations with the men who gunned down Ahmaud, who found refuge from the stress of life as a Black man by running past Robert Randall’s house in Brunswick, Georgia. I wonder what epiphanies could be discovered if they were able to listen to each other? Would they be transformed if instead of trying to defend their beliefs they simply shared stories of their life journies?

The Mutually Assured Destruction era is coming to a close. On January 22nd people throughout the world will be recognizing the Treaty on the Prohibition of Nuclear Weapons Entry Into Force Action Day as a result of over 50 countries as signatories.  While many reasons for the elimination of nuclear weapons can and have been made, it appears that one day’s events can sum up the insanity of one person having access to thousands of nuclear weapons.  The events on January 6 led to the president being banned from social media to curtail harm, yet he still has the nuclear launch codes. 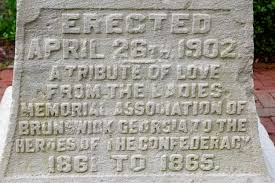 White domestic terrorists invading the U.S. capital spurred by a defeated president who can not imagine not being in the limelight should not overshadow the organizing work that had been happening on the ground in Georgia for years mostly by Black women. Their work has propelled Reverend Raphael Warnock, who inherited Dr. Martin Luther King’s church and will bring the collective vision of the Beloved Community to the halls of power in D.C.  I hope those whose eyes were opened by the violence built into the fabric of this country will be able to listen to those whose voices have been too long in coming to the table.

3 thoughts on “Georgia Still On My Mind”