During this season of Black Fridays, Cyber Mondays, big online retailer vans and trucks crowding streets and highways, advertisements for all manner of plastic stuff, etc., it’s a great time to remember Wally and Juanita Nelson. They lived lives centered around their belief in nonviolence as a way of life, a belief that led Wally to prison for refusing to fight in WWII. A belief that led the couple to refuse to pay taxes for war. A belief that evolved to an exemplary life of simple living.

“By simplifying my needs and living more nearly within the bounds of my own productivity, I hope to reduce my exploitation of the earth and its inhabitants,” explained Juanita in an essay titled “Nonviolence of Daily Living.”

That quote is in a beautiful new brochure that came in the mail recently from the Nelson Legacy Project at Woolman Hill in Deerfield, Massachusetts. In 2019, a group of friends in that area — many of them war tax resisters — raised money and took on the reconstruction and repair of Wally and Juanita’s house. They gathered up photos and writings and other materials to put on display in the house and held an open house at the property in October 2019 after completing the renovation.

A permanent exhibit to remember Wally and Juanita, share their story, and educate about simple living and nonviolence is being organized in the house. It will be open to school groups and visitors when such gatherings are allowed again. In the meantime, a website is in the works and will be housed on the Woolman Hill website (a temporary site is here). Many will be challenged by the idea that it is possible to live happy and fulfilling lives on a few thousand dollars a year. 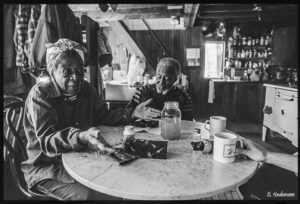 Wally and Juanita at home. Photo by Ed Hedemann, 1998.

I often look at the wall of books in our house and remember the time Ed and I were visiting Juanita some years after Wally had died. She looked at a shelf of about a dozen books and sighed “I have too many books!” Of course, this led me to burst out laughing given how much stuff we have collected. But Juanita was not judgmental. She knew how she had to live her life, and if it served as a model for others that was a bonus.

In 2005, Amy Goodman interviewed Juanita on Democracy Now! and ran the interview again in March 2015 when Juanita died. What a happy discovery that the interview ends with Juanita reading her poem, “Outhouse Blues.” 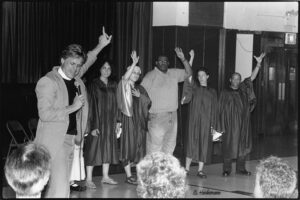 In the course of thinking about consumerism, how can I not mention the creative and ongoing singing and preaching protests of Reverend Billy and the Church of Stop Shopping. They were out on Black Friday in front of Jeff Bezos’ 80 million dollar manse in Manhattan. Juanita and Woolman Hill hosted Rev. Billy and the choir a few times for performances in Western Massachusetts. She would appreciate his recent message:

“Greetings in these strange, strange times. We steel ourselves for the onslaught of shopping at the holidays. Now it’s not the door-buster sale. Now it’s Amazon. We have 100 jets and 30,000 trucks to stop. Amazon puts a million metric tons of carbon dioxide into the air each week. Its life and death, Children! What’s the direct action protest that will work against this extraordinary threat? Let’s find it!  Let’s invent it! Earthalujah!”  www.revbilly.com

And, of course, let’s broaden that call to action to include the horrific contribution that militarism and war add to the climate crisis. Don’t pay for what you don’t want.

If you’d like to donate to the Nelson Legacy Fund, please email me for the address.