I don’t want to be snooty and judgmental about it. People hit a wall and feel there is no way around it for all kinds of reasons. But I do feel there is this “all or nothing” attitude that needs to be confronted. People see the risks before they consider all the options.

The all or nothing argument always makes me think of an old video clip of an interview with NYC resister Betty Winkler, who in her quiet way questioned why not “one fucking dollar?”*

Somehow that always makes me laugh, because, as she says a bit further on in that 2-minute clip, she is a rather quiet person, so her insistence on this point is a bit surprising.

My partner in resistance, Ed Hedemann, often brings up in workshops that he’d rather 1,000 people were resisting, for example, $10 each than a single person resisting $10,000, though the amount of money is the same, the impact is much greater. “It’s the act of resistance that the IRS hates, not so much the amount resisted.”

I often point out that many of us who are resisting, as best we can, 100% of federal income taxes owed started at a low level. We often dipped our toes in with telephone tax resistance** or some percentage of what was owed. As we felt stronger in our resistance (or began to earn more money), we began to feel we could not send anything to the government — or we began to figure out how to live without reported income or below the taxable level. And as Betty also says in that interview “Everybody who has done and everybody who is doing it for the first time, I think, would feel a renewed sense or a new sense of self-empowerment.”

For myself I know that over the years being a war tax resister has strengthened my non-cooperation and made me less afraid to “question authority.” 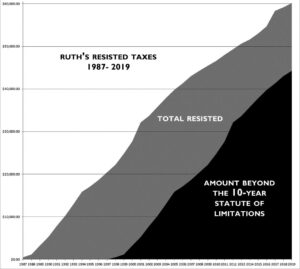 In the end I don’t believe that war tax resistance is about the amount. If I look at my own resistance since 1987, the numbers add up to not buying about fifty M16 rifles by Pentagon standards (but with many organizations benefiting from my redirected taxes).

Bottom line for me, it’s the protest, the resistance — that’s what the government does not want you to do. They don’t want anyone to think about refusing $5. It might encourage 100 others to refuse $5, and then those 100 might encourage….

Well, I can dream anyway.

* Here’s the quote if you don’t want to watch the video: “…with the realities of the day being what they are I would wish that everybody who marched, everybody who sent a letter of protest to their representative would just resist one fucking dollar. Just resist something.” Oct. 2005

** Federal excise tax is now only on local landline calls, so fewer people have a tax to resist. In its heyday there was federal tax on all long distance and local calls, but with the advent of flat rate services and cell phones the feds were forced to drop the tax. More info here….

One thought on “All or Nothing Syndrome”