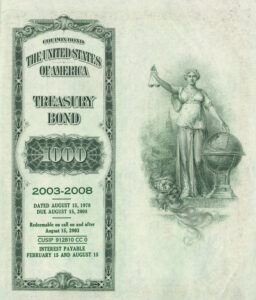 The U.S. government borrows money by selling Treasury bonds and other similar securities (“treasuries”). Much of the money it borrows in this way goes to the military, so people who do not want to help finance the military will want to avoid investing in such bonds.

Earlier this year, a war tax resister contacted me. She was concerned about avoiding such bonds in her retirement account and was having a hard time finding good places to put her money. Even the so-called “socially responsible” exchange-traded funds and mutual funds seemed to include such bonds in their holdings.

Some Overseas Funds Screen Out Treasuries

She also pointed me to this Bloomberg article: “ESG Hardliners Blacklist $16 Trillion U.S. Treasuries Market”. According to that article, some European companies that specialize in socially-responsible investments avoid investing in U.S. government debt because of U.S. policies. Excerpt:

“ESG-dedicated investors would usually avoid or question investments in U.S. Treasuries,” said Rupini Deepa Rajagopalan, head of the ESG office at Berenberg, which oversees about 36.7 billion euros. She cited the death penalty, nuclear weapons, and the U.S.’s non-participation in global environmental accords, such as the Kyoto Protocol.

(“ESG” stands for “Environmental, Social, and Corporate Governance” which is one of the ways socially-responsible investing is described.)

Many Funds Use Treasury Bonds by Default

But my correspondent was frustrated when she reached out to an investment advisor in the United States who specializes in socially-responsible investing. That advisor told her, “I have heard your concern before, but U.S. Treasury debt is unfortunately practically impossible to 100% divest from, as it is used as a default holding for many funds when they have available cash.”

He gave the example of the Calvert Green Bond Fund which, while its focus is on environmentally-responsible “green” bonds, “likely has some exposure to U.S. Treasury debt.”

Coincidentally, more than half of my own retirement savings was invested in that very fund, so I was surprised and upset: I thought I had investigated whether that fund holds Treasury bonds before I chose to invest there.

How Can You Find Out What a Fund Invests In?

You can use the weapon­free­funds search engine at As You Sow to search for equity funds that screen out mil­i­tary weap­ons man­u­fac­tur­ers.

It’s something of a chore to find out what a fund invests in. If a socially-responsible fund has specific screening criteria that match what you care about, and you trust the fund managers to apply those criteria conscientiously, you can relax. But it is uncommon for U.S.-based socially-responsible funds to screen out U.S. Treasury debt. So if you want to make sure you are not inadvertently investing in treasuries, you may have to dig.

Every quarter, funds are supposed to issue a “Certified Shareholder Report” that lists the investments held by the fund at that time. This report is a public document, and if you are willing to battle the user interface at the Securities & Exchange Commission’s EDGAR tool, you can look it up on-line. Some of the reports are huge (I suffered a rare browser crash trying to look at one of them) but the data is there.

But there are limits to the usefulness of these reports. For one thing, they represent the investments of the fund only at a particular point in time. By the time you read the report, there have probably been some changes. Since funds often use Treasury bonds as temporary reservoirs for excess cash, just because a fund had no such investments listed in its report doesn’t mean they never invest that way.

How Treasury Bonds May Hide in a Fund’s Holdings

For another thing, a fund may invest in treasuries without investing in anything called “Treasury Bonds.” That’s how I overlooked the treasuries held by that Green Bond fund in my own retirement account. There were no Treasury bonds listed in the Certified Shareholder Report for that fund, but it did invest a significant amount of its assets in something called the “Calvert Cash Reserves Fund”—and as it turns out, that fund is chock-full of treasuries.

I found other examples like this, too: The Trillium ESG Global Equity Fund, for instance, invests three and a half million dollars in something called the “First American Government Obligations Fund” which is government debt top-to-bottom. A number of funds I looked into also had on their books “Repurchase Agreements” which were typically collateralized by U.S. bonds. There are probably other ways treasuries can hide, too, that I’m not clever enough to notice.

So to be really diligent, you have to start peeling the onion: looking not only at where a fund invests directly, but also at what additional funds it might invest in and what their investments look like. That’s a lot of work for an unsophisticated investor like me. I’d rather leave it to the professionals, at least if they’re already on the case.

I reached out to the press spokespeople for several U.S. companies that offer some of the most popular socially-responsible investment funds, to ask if any of their funds screen out investments in U.S. government debt, or, if not, if they have any advice for investors who don’t want to see their money invested in that way.

Eventide Says It Avoids Treasuries in Its Funds 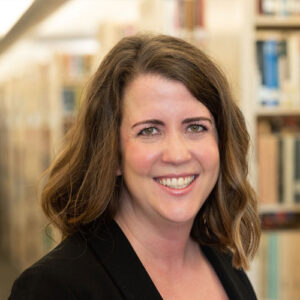 Many of the companies declined to answer. I did get an encouraging answer from Julie Jarrett of Eventide Funds, a faith-based socially-responsible investment company based in the U.S.:

Under normal circumstances, we avoid U.S. Treasuries in our funds because there are some activities of the government that we do not want to facilitate (e.g. offensive warfare, or funding to clinics providing abortions). Because Treasuries are general funding vehicles, an investor does not know which department of the government is an end recipient of the funds.

In addition, our income-focused products seek to screen out municipal bonds if the “use of proceeds” funds a state agency that participates in services that are contrary to our values-based screens.

However, when I looked up the EDGAR filings for Eventide funds, I found that most of them seemed to have indirect investments in treasuries: Their Gilead Fund is partially invested in the treasuries-heavy First American Government Obligations Fund; and their Global Opportunities Fund, Healthcare & Life Sciences Fund, and Multi-Asset Income Fund are each partially invested in Fidelity Investments Money Market Fund which is about half-treasuries. Of the funds I reviewed, only their Limited-Term Bond Fund seemed treasuries-free.

When I asked Jarrett about this, she replied:

In order to comply with the rules and regulations of the SEC, the mutual fund complex that Eventide is a part of has a list of securities to manage short term liquidity… When it comes to all other investments that Eventide has discretion over, we try to avoid treasuries under normal circumstances…

Joe Sinha of Parnassus Investments (also U.S.-based), on the other hand, told me their ESG research team decided against screening out treasuries: 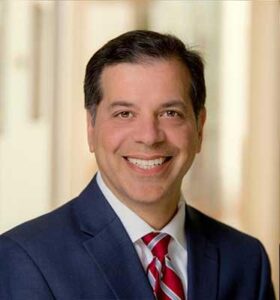 Parnassus believes it’s acceptable to buy treasuries because, on balance after various inputs are considered, the federal government is responsible for many good activities, like helping fund retirements (i.e. social security), providing medical care, revenue for education, and even recently helping to fund the search for a cure for COVID or supplying emergency aid.

“Investing with values, or ESG investing, means aligning someone’s personal values with how a Fund is managed,” Sinha told me. “So, it really depends on each person’s perspective.”

I asked him what advice he had for investors who were having a hard time finding a fund that matches their values. “Some investors chose to select individual bonds, like green bonds or social bonds, but these come with specific credit risks.” That is to say: you can always assemble your own custom-made fund by picking and choosing stocks and bonds that match your values, but then you lose the advantages of professional attention to the quality of your portfolio.

It’s harder than it ought to be to avoid loaning the Pentagon money with your investments. If you’re lucky, you may be able to find funds that match your preferred investment strategy and social responsibility criteria, and that avoid treasuries. You could also do some careful research into funds that may just happen not to invest in treasuries, even if that is not an explicit screen they apply. If all else fails, and if you’re willing to put in the time, you can manually assemble an investment portfolio from individual stocks and bonds and other such investments that you have personally screened.

But unfortunately, you cannot assume that a “socially-responsible” mutual fund or exchange-traded fund—even one that explicitly screens out military contractors and weapons manufacturers—does not provide funding for war by extending credit to the Pentagon.

David Gross is the author of 99 Tactics of Successful Tax Resistance Campaigns. He blogs about tax resistance and related issues at The Picket Line.

5 thoughts on “Can You Keep War Bonds Out of Your Socially-Responsible Investments?”