In 2017, I attended a retreat at the Su Casa Catholic Worker in Chicago where the black-led #LetUsBreathe Collective guided a mostly white gathering of Catholic Workers through various anti-racism exercises and candidly related the harsh racist reality of policing in the City of Chicago. They noted that approximately 50% of Chicago’s budget was dedicated to the police department, particularly when counting the millions of dollars the city pays out in lawsuits resulting from police misconduct. (“Misconduct” seems to be a totally inadequate term!) The group has regularly called for the city to redirect its $1.4 billion police budget to programs that would better serve the community. Imagine what could be accomplished with $1.4 billion!

When I was informed that nearly 50% of Chicago’s budget was being dedicated to “security,” I had some déjà vu, since every war tax resister knows that about 50% of the discretionary federal budget is also dedicated to “security.” Additionally, this call for redirection reminded me of the war tax resistance practice of redirecting refused federal income tax dollars to individuals and groups that are underfunded. 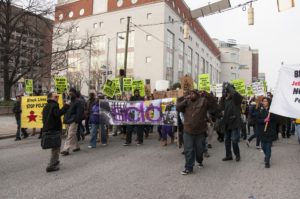 March in Baltimore. Image by Bruce Emmerling from Pixabay.

Once I returned to Milwaukee, I examined our own city budget and discovered that the City of Milwaukee also dedicates nearly half of its operating budget for the police department. With the great needs facing our communities and the repeated instances of police harassment (and sometimes murder) of black citizens by the Milwaukee Police Department, these financial priorities are terribly misplaced.

In the wake of the probable recession that may follow the COVID-19 pandemic, serious budget decisions will need to be made by local governments across the United States. The obvious answer would be to greatly scale back police funding to preserve the necessary services performed by city and county governments. But I have a difficult time believing that local governments will have the courage to do this.

Obviously, when it comes to misplaced financial priorities on the federal level, war tax resisters have methods and options to resist funding military expenditures. These same options are not available on the local level, where property taxes, rent, sales tax, parking tickets, etc. fund our local governments. In this instance, I feel more like our war tax resistance neighbors in Canada and Europe, where federal tax withholding from wage positions is mandatory and war tax refusal is much more difficult.

Nevertheless, war tax resistance does allow us to participate in the defunding of police departments to some degree. “1033 Program,” named for the section of the National Defense Authorization Act (NDAA) of 1997 that granted permanent authority to the Secretary of Defense to transfer defense “material” to federal and state agencies for use in law enforcement, has allowed the U.S military to transfer military-grade weapons to local police departments for decades. When one refuses to pay federal income taxes, one refuses to support this heinous program. 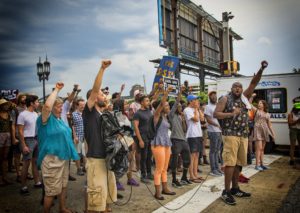 Protest in Baltimore. Image by Bruce Emmerling from Pixabay.

Additionally, we have now seen President Trump wanting to invoke the Insurrection Act of 1807, which empowers the president to deploy active U.S. military and federalized National Guard troops within the United States to suppress civil disorder, insurrection, and rebellion. Thankfully, there has been some push-back to this idea even from within Trump’s own administration. But this could still happen and it would be funded by federal tax dollars.

Lastly, police departments across the United States benefit from federal grants that support some part their budget. (For example, the Milwaukee Police Department was just awarded a $9.7 million grant from the Department of Justice to fund 30 police officers.) Drawing these connections between war tax resistance and the funding of police departments that consistently infringe on the rights of its African American citizens deserves to be highlighted as we work toward ending government-funded killings at home and abroad.