“The Status & Future of War Tax Resistance.” That’s the tag on an old folder floating around my office. When I finished my years as NWTRCC Coordinator a few people asked if I was going to write about the WTR movement, as had previous coordinators*, but I never got to it. Actually I never had much to say except, “It used to be stronger, with more active groups around the country. An undetermined number of us will keep resisting as long as taxes go to war.”

Today as I pondered a blog topic yet again I decided to do a search on “war tax resistance” and see where that might lead. Interestingly, it led me to a recent article, “Tax Revolts Aren’t Out of the Question.” There’s a hopeful topic! 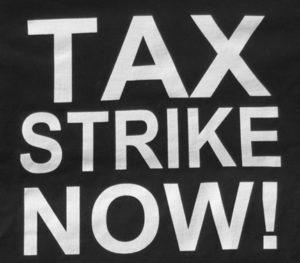 In the article, the author Stephen Mihm focuses on the current budget crises of state and local governments. He looks back at the Great Depression as the closest precedent for today’s “coronavirus-induced declines in tax revenue” as he puts it. Even though the federal government could lower taxes and carry debt, states and localities were desperate. “For every penny saved in taxes in Washington, five cents were added to taxes at the City Hall and State House,” he quotes from a critic at the time. “Taxpayer leagues” formed around the country and created a visible tax resistance movement, some calling for a tax strike, which led the powers that be to brand them as (the always scary) “anarchists.”

By 1933, fears of cuts in essential services strengthened the calls to “pay your taxes,” and the repeal of Prohibition allowed state and local governments to raise revenue with the sales tax on alcoholic beverages and licenses. (The federal government still gets significant revenue from those excise taxes on alcohol.)

What can we do to make war tax resistance a more visible option at this time? WTRs have long included “healthcare not warfare” in our slogans and platforms. With tax day still 6 weeks away (as it stands now) can we make that message or similar one we use across the country for a more unified and visible presence? Can we better promote our alternative fund and individual redirection to healthcare, food programs, etc., to bring more attention to the desperate need to move money from the Pentagon to so many other desperate needs? 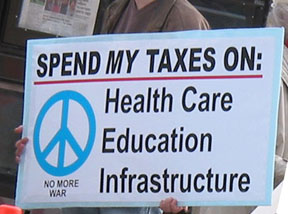 The Poor People’s Campaign is working to build their virtual Mass Poor People’s Assembly & Moral March on Washington on June 20,2020.  It seems to me their platform and messaging do a very good job of connecting a whole range of critical issues, with an emphasis on the poor who have suffered drastically from the coronavirus and underlying structural inequalities. A good resource is their series of fact sheets, including a national and state  versions of “Defund Militarism: How a Policy of Violence Has Bankrupted Our Communities in United States.”

It may seem that there’s no hope for a resurgence but refusing taxes for war – and resistance to the government in general – has historically gone through cycles. While some may see no possibility of making WTR more visible, I can always hope….and hope for some comments with useful organizing ideas to take advantage of wider concerns during these exceptional times.