Originally, our May 2020 conference was going to take place in Chicago. With the COVID-19 pandemic, we made the decision to meet online using Zoom instead. (Though I would like to thank the following groups and individuals who had put time and energy into the original Chicago meeting: Su Casa Catholic Worker, #LetUsBreathe Collective, Kathy Kelly, and Rosalie Riegle.) 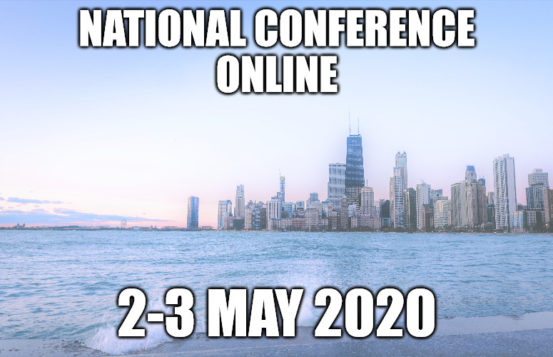 NWTRCC’s first online conference was a success. (Though to be clear, NWTRCC has had an online component to its conferences that allowed folks who were offsite to join us for quite a few years now.) About 50 folks signed up for the conference and 42 attended at least some portion of the conference. We had folks joining us from Alaska to Georgia, from San Diego to Houston, and even folks from both Portlands (Oregon and Maine).

The conference started on Saturday May 2 at 11a Eastern / 8a Pacific. Over 30 folks joined us for our first session, in which everyone provided an update on their WTR situation and to highlight any local collaboration between war tax resisters and other justice movements. For those who were new to WTR, it was an opportunity to hear a variety of WTR experiences and share their own thoughts and concerns about WTR. 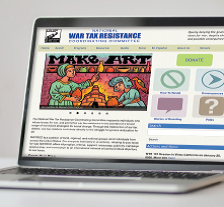 This session was a natural lead-in to our WTR 101 session, which started one hour after the first session ended. We had thirteen folks show up for this session, though most were seasoned war tax resisters. (The fact that so many long-time WTRs joined us for 101 was a surprise. Normally, WTR 101 & 201 are concurrent, so folks have to choose one or the other.) The mix of interested and new folks with seasoned resisters led to the sharing of many perspectives and experiences.

After another hour break, we gathered again for WTR 201. This time, about 25 folks joined us, including some of the new folks from WTR 101. We covered the new W-4 form, home visits, passports, frivolous warning letters, IRS response to COVID-19 (suspension of most collection efforts until July 15), stimulus checks, deferred compensation and IRAs, unemployment (& the extra $600/week, which is taxable), and head of household fraud.

The conference finished on Sunday morning with our business meeting. The business meeting minutes will be posted later in the month. I would like to especially thank Anne Barron and Justin Becker, who each finished a three-year term on NWTRCC’s Administrative Committee (AdComm) when the conference ended. I’d also like to welcome Lida Shao (New York, NY) and Joshua Wrolstad (Eugene, OR), who were selected to begin three-year terms.

With this being our first fully-online conference, we tried to keep it simple (which hopefully made the conference easier for participants and planners alike). Our next conference will be 6-8 November 2020. We have an invitation to meet in Colorado Springs, Colorado, but we will have to see what the state of the pandemic is at that point. The AdComm plans on making a decision by July 1. We’ll keep you updated. Thanks to everyone who attended the conference and made it such a success. It really was a delight to see so many new faces with faces I had not seen in a while.