There is a call for a General Strike beginning on May 1, 2020. ‘We are the Shutdown’ is a network of organizations calling for an ongoing strike against the increasingly lethal economy. The general strike encourages the use of various tactics like sick outs, rent strikes and certain workers not fulfilling part of their job responsibilities.New worker collectives have emerged including Amazonians United, Whole Worker and Gig Workers Collective to raise awareness of the working conditions at retail outlets and delivery services. Vanessa Bain, co-founder of the 17,000 member Gig Worker Collective, shared with the Intercept “May Day is not just a one-time symbolic action, but also about building real, vast, and broad sweeping networks of power.”

From We Are the Shutdown:

A former Amazon employee, Christian Smalls who was fired after expressing his concerns about workers safety tweeted “It’s time to join up! Protect all workers at all costs we are not expendable or replaceable- enough is enough- TAKE THE POWER BACK!”  Workers taking their power back seeming all the more urgent when the president suggested reopening the US economy on May 1st as well as Amazon ending its unlimited and unpaid time off for workers.

One of  the participating organizations, 5 Demands Global,  clearly identifies in name and purpose. The 5 Demands are : Free Health Care/ No Work/ No Paying, No Debt/ Free Prisoners/ Homes for All. You can find more information on their website. The Youth Liberation Front had a rather humorous list of demands for the call for Autonomous actions On May 1st on their website It’s Going Down.

One of the suggested actions for May Day from We Are the Shutdown  is to reach out to coworkers, neighbors and friends. That is what NWTRCC had planned for May Day with our for our bi-annual conference from May 1-3.  With the concern of COVID-19 and most of the US still shut down, we shifted our in person gathering to a video conference. Fortunately, we have more people signed up for the conference than could normally make it in person. It will be the first conference for many of the registrants. We will share stories of collaborative resistance in our local communities and strategize on how to build upon the national network. Now is the time to share messages of empowerment to the masses about redirection of our resources and how we as War Tax Resisters have experimented with this tactic that has long been employed in this country.

Hope to see you this weekend at the NWTRCC Gathering.  For information about registering for the NWTRCC gathering check by clicking here 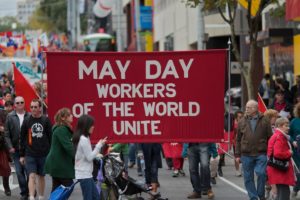 Image from Flickr of May Day Gathering in Melbourne

History of the May Day in the US

For many, May 1st summons up images of dancing around a maypole and traditional European spring celebrations but for movement people we often think of International Workers Day and Haymarket Square in Chicago. During a convention of labor union in Chicago in 1884, proclaimed that beginning on May 1, 1886 8 hours of labor would constitute a legal day of work with the same amount of wages. On that day more than 300,000 workers in over 13,000 businesses walked off their jobs in the first May Day.  Chicago drew the largest crowd with 40,000 workers going on strike.

In the days that followed almost 100,000 walked off of their jobs and filled the streets of Chicago displaying the strength and unity of the workers.  Much attention focused on the Mc Cormick plant which had locked out workers since the beginning of the year. The plant was heavily protected by armed Pinkerton agents and police. They had harassed and beat up workers as they picketed outside the plant and to protect the strike breakers. On May 1, over half of the strike breakers deflected to join those on the picket line as 400 armed agents watched.   After a speech near the plant on May 3rd, hundreds of demonstrators joined the strikers on the picket line. During skirmishes with armed agents,, strikers began throwing rocks to which the police responded to with gunfire, killing 2 people and injuring many.

The following day a call was put out to meet in Haymarket Square. The weather was rainy and led to a small crowd of 3,000 people. Many of the speakers made their speeches and then got out of the weather. The mayor of Chicago attended the gathering and found it rather uneventful and left. As the last speaker was wrapping up his talk and bringing the gathering to a close, the police arrived en masse and marched in formation to break up the gathering that was already dispersing. A dynamite bomb was thrown in the path of the advancing police. Within minutes the square was cleared except for 4 strikers and 7 police were killed and over 70 wounded. There is evidence that some of the police losses were due to “friendly fire.”

Hundreds of labor leaders and sympathizers were rounded up, questioned and harassed.  Eight anarchists were convicted of conspiracy despite the fact that it was known that none of them threw the bomb but it was believed that maybe one of them had built the bomb even though there was no evidence. Seven were sentenced to death and the other was sentenced to 15 years in prison. Four of the men were publicly executed on November 11, 1887. At the Haymarket monument are the last words of August Spies before he was executed “The time will come when our silence will be more powerful than the voices you strangle today.” 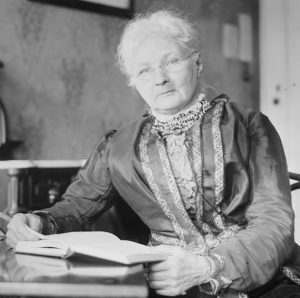 Mother Jones, who was born on May 1, reported how the the worker in Mexico remembered those killed in Haymarket Square on May 1, 1921 Image from Wikimedia Commons

One thought on “May Day”