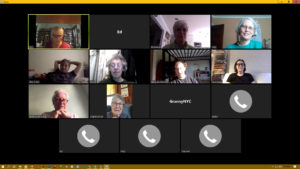 There’s something to be said for holding a meeting online. Our NYC War Resisters League group usually meets in Manhattan every month or so. We’re a small group with meetings ranging from 6 to 12 people, but at our virtual meeting to plan a virtual April 15th action, 15 people joined, most by video and a few by phone. It was quite a successful meeting with a lot of enthusiasm for virtual tax day protests — and a good deal of hope that we could be out in the streets by July 15. 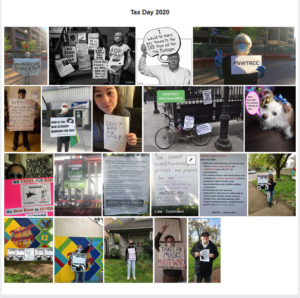 Post-April 15 I’m thinking about the value of virtual protest and having trouble coming up with anything more than:

As opposed to being out in public — whether standing at a vigil, risking arrest, hanging banners, or handing out flyers outside the IRS or a post office, at a busy intersection, above a highway, or standing along a busy street — which offers:

Feel free to add to (or take issue with) those lists in the comment section.

Those of us who like doing street protest do feel frustrated these days, although there are some great actions taking place. Today, April 24, “Democracy Now!” showed some footage of a “Trump Lies, People Die” action in DC outside the White House and in front of Trump International Hotel (yeah, the one asking for a break on the cost of their lease). Sponsored by the Center for Popular Democracy, with signs on cars circling and others on the sidewalk ,the group placed body bags in front of the hotel  with a spokesperson demanding more PPE, more testing, and real leadership. Good action and kudos to them (some good footage on this site)!

Still, I try to remind myself that we protest every day with our refusal to pay war taxes. Even if we aren’t in the street, we do get the government’s attention, if only by the fact that the IRS has us on their collection list.

As with any of these actions, if we had tens of thousands in our network, instead of the small numbers that we do, we would get more attention with any of our efforts. Reminds me of a favorite Thoreau quote, despite the narrow gender reference:

“If a thousand men were not to pay their tax bills this year, that would not be a violent and bloody measure, as it would be to pay them, and enable the State to commit violence and shed innocent blood.”