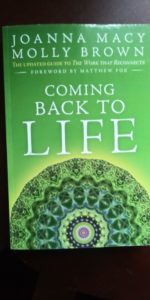 A few weeks ago I co-facilitated a weekend workshop on the Work That Reconnects. The program was started by Joanna Macy and comes out of her work that spans over 4 decades as an activist largely on anti-nuclear activities. For weeks I had to remind myself that WTR was not War Tax Resistance but rather the Work That Reconnects. We journeyed to the small town of New Harmony, Indiana which had once been a part of a wave of Utopian communities that sprung up in the early 1800s to create a new world here in the US largely by German immigrants. The people envisioned a world in which all would be welcomed.  They were experimenting with the needs of their times and being adaptable to each other.

It was an appropriate space for us to meet as we delved into the Work That Reconnects close to the Wabash River. I learned that this area was populated by the Kickapoo, Potawatomi, Delaware, Miami and the more widely known Shawnee peoples. Similar to the “founders” of New Harmony, the original peoples came there after European people put pressure upon the populations of the Eastern states. The waterways were the lifelines of culture. It was also a place of resistance. Around the Wabash and Ohio Rivers emerged the leader Tecumseh whose peoples’ armed resistance was crushed under the orders of future President Harrison. Tecumseh supposedly put a curse on the White House and Harrison died 30 days after his inaugural address. I am grateful for the prophetic words of my partner in preparing this land acknowledgement by stating “but the indigenous people still endure…that live and their culture and language exist even after centuries of trauma. Many indigenous  prophecies suggest that a time of change will soon be upon this land and the current dominant culture will not be in charge. After a period of purification people of good will will be recognized as leaders.”

The Work That Reconnects follows a model of a spiral, that most integral symbol of life. The starting point is Gratitude, connecting with where we come from and the resources available to us- emotionally and physically. Then into Honoring the Pain- for our world, the peoples in it including and centering ourselves. The next is Seeing with New Eyes- how to critique capitalism as the dominant narrative and all the underlying assumptions about our worth. I was reminded that Capitalism profits from our misery. The final stage is Going Forth- making commitments to each other about how we are going out to Be the Change We Want to See in the World.

I have been thinking a lot about the connections between War Tax Resistance and the Work That Reconnects. Both are rooted in the integrity of the Whole. Maybe as War Tax Resisters we need to rework our way back from the spiral. We have committed to not paying for wars. That is our going forth. We have seen  how the systems of capitalism which sends over half of our US budget to warfare does not work. We acknowledge that there are people in our communities with needs that we would rather support. And that brings us to the often overlooked Honoring the Pain.

While there was much said about late stage Capitalism from the perspective of the Work that Reconnects but never could one have predicted it would have come so quickly. As War Tax Resisters, we have emphasized redirection efforts in recent years but now our whole world is recognizing the needs of others on a scale never witnessed before.

People will be talking more about where we as a society invest our resources.  It is an opportunity for us as war tax resisters to emphasize Redirection efforts in order to ensure that no one gets left behind.  As we had our closing circle of the Work that Reconnects along the banks of the Wabash River I stated my belief that we were entering into a new phase of creating another utopia. I look forward to hearing of how you continue to redirect your energy and resources to your community. I am trying to take the advice of my godmother that charity begins at home. I hope you are all being kind to yourselves and each other. Be Well.

One thought on “The Work That Reconnects and WTR”